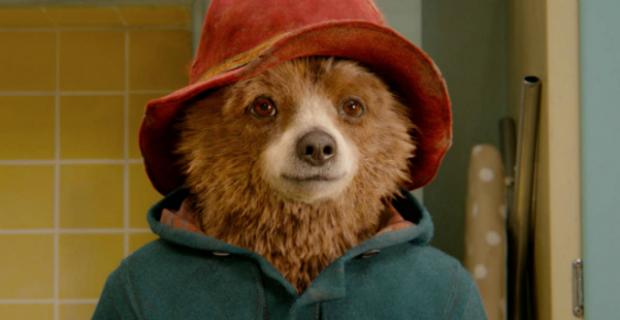 I was in the perfect mood to see Paddington, on a cold night, armed with a cup of hot chocolate, the only person in the theater. And I was not disappointed.

Paddington is of course the “small but polite” young bear who has been captivating British readers since 1958, along the way finding a smaller but devoted following in the US (as do most things British).

As a child (and later a non-parent) I never caught the Paddington bug, but a little research indicates that the film, which combines a computer animated/animatronic star with human actors and live settings, is largely true to his original story. A native of “darkest Peru,” he is sent to London when his aunt grows too old to care for him. Inspired by stories of how orphaned children found new homes during The War, she gives him a note that reads “Please Look After This Bear. Thank You.” After stowing away on a freighter (hiding in a lifeboat, of course, being nothing if not traditional) he ends up at the Paddington train station in London, where he is taken in by the Brown family, who give him his human name. (Did I mention that he talks? And sounds like Ben Whishaw?)

This being perhaps insufficient drama to sustain the course of a feature, the film borrows from 101 Dalmations in the form of Nicole Kidman as a Cruella De Vil sort in a snakeskin jumpsuit. She is a taxidermist, and what she wants to do with Paddington is one of the few instances of darkness that might put off younger children. (The fate of Paddington’s uncle in early scenes is another.)

Because it needs to find a wide audience (it is the most expensive film ever made by the European production company StudioCanal, a name you’ve most likely seen on Luc Besson productions), Paddington includes some ostentatious action sequences, including our bear taken on an unexpected flying tour of London and a chase sequence through one of those enormous British museums. To their credit, these scenes show off the city sufficiently to make up for the standard-issue rollercoaster thrills.

But it never loses touch with the charming aspects of the character, who has been raised to believe good things about Brits and is determined to find them, even if he has to dig a bit. (It is a story that says, in a gentle way, expect the best from immigrants: they have come here because they look up to you, and they will reward your faith.)

Co-written and directed by Paul King, of the cult hit comedy series The Mighty Boosh, the movie is such a slam-dunk for Anglophiles that you hardly need to bring children along with you for an excuse. Mr. Brown is played by Hugh Bonneville, Downton Abbey’s Earl of Grantham and a good enough sport to get into drag when needed. Mrs. Brown is Sally Hawkins, star of Mike Leigh’s Happy Go Lucky and possessor of the widest smile in film history. Julie Walters is their aged relative Mrs. Bird; Jim Broadbent is antique dealer Mr. Gruber, a fellow immigrant (having arrived on the Kindertransport); Peter Capaldi, the current Dr. Who but forever beloved in the Faust household as political fixer Malcolm Tucker from The Thick of It, is cantankerous neighbor Mr. Curry. Those of you addicted to Netflix for its treasury of British television will also recognize familiar faces from Peep Show, Little Britain, The Mighty Boosh and other shows.

Kids who see a lot of American movies made for them may find Paddington somewhat sedate. I found it as warm and fuzzy as its star.

No matter how badly a movie starts out, I try to remain optimistic for as long as possible that it will get better. Sometimes this effort is rewarded, more often not. I can point to the exact moment when I gave up hope for Blackhat. It was when a computer hacker reacts to an attack by three Asian toughs by beating the tar out of them.

Of course, said hacker is played by Chris Hemsworth, best known to regular filmgoers as Marvel’s Thor, so the sight isn’t wholly jarring. But casting is the only reason we have to explain why this character would be so adept at manual combat.

A story about representatives of the Chinese and American intelligence communities traipsing the globe in search of the villain who caused the meltdown of a nuclear facility and manipulated stock market computers to make $75 million in a few minutes, Blackhat offered promise to be a thriller about the kinds of cybercrime we might have to anticipate in the near future. That it was directed by Michael Mann, who has made some of the most intelligent crime dramas of the past few decades (from Thief and Manhunter through Heat and The Insider) raised expectations. But Mann seems to have taken the assignment only as a chance to indulge his liking for kinetic action sequences, which are no substitute for a plausible story. He directs his actors as if hoping that by minimizing them we’ll forget about them, and that almost happens. But you can’t do without story entirely, and what there is here would require very little retooling to be a James Bond script, albeit one that even Roger Moore would have rejected. The writer, otherwise unknown to me, is one Morgan Davis Foehl, and one can certainly say that this particular script is emminently Foehlish. It’s also as dull as reading computer code.

According to the Hollywood Reporter, the script for The Wedding Ringer has been kicking around since 2002. I was surprised to read this as my reaction to watching comedy was that what it mostly needed was a rewrite or two to sharpen what was good about it and get rid of what wasn’t. Over all that time, maybe the real problem is that one too many cook got to stick his fingers in the pot.

Kevin Hart has the title role, an LA hustler who makes a good living hiring himself out as a hip best man to guys who have no real friends to turn to for their weddings. His skills are challenged when financial executive Josh Gad comes to him in need not just of a best man but seven groomsmen as well—and in ten days.

The Wedding Ringer is the directorial debut of Jeremy Garelick, who also wrote the script, which also surprises me to learn because he rushes through all of his best material. Maybe it was his way of not having to cut anything. He can’t have written it with Hart in mind, and seems to have done nothing to tailor it to the comic’s persona. The humor isn’t as crude as other wedding comedies of recent years, which is a plus or a minus depending on your perspective. Nor is the bromantic aspect well fleshed out. It’s not an awful movie, but neither is it memorable: you’re likely to have forgotten it by the time the next Kevin Hart film hits theaters next month.