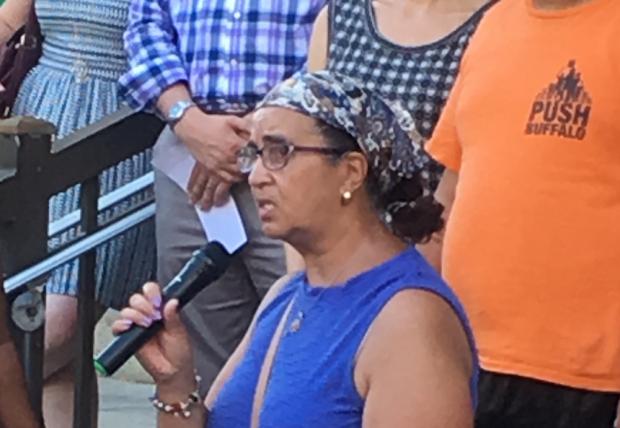 Despite a biting lake-spun wind and skies thick with the threat of first snow, Dennice Barr arrived at Spot Coffee on Chippewa last October by foot. We were meeting to discuss her grassroots activism.

Barr was coming most immediately from a meeting of the Buffalo Parent-Teacher Organization, where the topic of conversation had been the Niagara Frontier Transportation Authority, which puts time and route restrictions on students who use the Metro system despite charging the district unlimited-use fares per child—restrictions that raise safety concerns and contribute to tardiness and absenteeism, parents argue.

But Barr’s 18-minute-each-way trek began that morning in the Fruit Belt, where the 60-something-year-old has lived, on and off, nearly her whole life.

Barr’s decision to brave the frigid weather wasn’t made in some fanatic commitment to fitness. It was the less unappealing of two options: wait up to 60 minutes for a bus in her neighborhood or hoof it in the cold. As a public transit-dependent city resident, Barr may be inconvenienced by limited weekend service, but she will not be throttled by it.

That morning, though, Barr wasn’t so concerned with her own transportation troubles as she was that of her neighbors—the aforementioned students, the senior citizen of the Fruit Belt for whom walking is not an option, and the homeless trying to find refuge in subway cars and transportation centers.

“The weather’s set in,” she said somberly as her mind travelled to the men, women, and children who live on Buffalo’s streets. She wondered out loud how executives and officials justify making six figures a year and taking bonuses and salary increases when the people they’re supposed to be serving are not getting served.

“We just don’t value people anymore,” she lamented with a quiet dignity that pervades most of her speech. “We’re so concerned about property, property, property. We’ve lost our sense of what’s really important.”

When asked if she thinks Buffalo of yesteryear operated with more humanity, she wavered between a definitive yes and cynical uncertainty.

“All I know is that, in my lifetime, I need to see a difference.”

Barr believes that a disregard for individual human life undergirds our city’s social ills. Rallying against that collective mindset and pushing back against its manifestations is thematic to her activism.

The focus of Barr’s work isn’t the city’s relationship with the NFTA, although she is happy to fight the good fight for ridership rights when and where her insights and voice are needed. Her primary concern is the Fruit Belt and its denizens, and the resounding effects of City Hall’s decades of disinvestment in a community disfigured but not nearly broken by the ravages of “progress.”

Barr lives in a Fruit Belt home that has been in her family for two generations and close to 75 years. When she was a child, it was owned by her aunt, Mama Kay—a fitting moniker for the woman who served as a mother figure to her during a period in life Barr describes as complicated.

From the time she was four years old, Barr recalls spending significant time at the family homestead immersed in the rich tapestry of Fruit Belt life. After church on Sundays, the married couple across the street from Mama Kay’s played jazz records from the back of their home, the notes wafting through their shared airspace as sweetly as the scent of roasting cereal grains. In warm weather, neighbors would open their windows and doors to the music—a communal soundtrack to the quotidian chores and social calls that characterized the Sundays of her youth.

“That’s where I think I really got that sense of community from,” said Barr.

Today, the Fruit Belt looks and sounds differently than she remembers, even as other facets of the community remain intact. One half of the jazz-playing couple still lives across the street, for instance, but the records have stopped spinning. And even though Mama Kay is gone, her maternal spirit seems to live on in Barr.

John Washington, director of organizing at PUSH Buffalo, first met Barr five or six years ago when they both were working with Citizen Action of New York to stop out-of-school suspensions in public schools. He got to know her best when he was assigned to work with the Fruit Belt Advisory Council to develop a campaign around getting a community benefit from the Buffalo Niagara Medical Campus, which sits adjacent to the Fruit Belt and has been a source of parking, infrastructure, and pricing woes for the neighborhood. He describes her as a second mother to himself and others.

“The way she cares for especially young black men, and recognizes the need and that it takes a village,” he said in a phone interview. “She is a person who sees people, knows what people are going through in their lives, and tries little things to support them and help them show up with their full selves.”

“If you walk the Fruit Belt with Dennice Barr,” he continued, “it’s going to take you an hour, because she is going to stop and talk to everyone she sees, and everyone knows her. She has relationships with absolutely every single person, from drug dealers to church leaders, whether they like her or they don’t. Every single person stops to talk to her.”

In addition to compassion, Barr displays peerless clarity of purpose, determination, intensity, and consistency, which Washington says has enabled her to break down barriers and get people to yield to the community’s demands when no one else could.

“Elected officials, people on the medical campus, and developers respect her and know that she isn’t going away,” he said. “When she wants something, she demands it very clearly, framed in a very old-school, fair way. She has a real dignity and knows what her community deserves, and she doesn’t back off from that.”

When Barr walks the Fruit Belt, she must be acutely aware of the testament of the physical landscape and all the ways it is at once different and the same. Well-looked-after homes near expanses of vacant lots and dilapidated properties speak to the pride of place that continues to suffuse the fabric of the neighborhood despite decades of redlining. Discriminatory disinvestment and unfair lending practices have plagued predominately African American neighborhoods like the Fruit Belt for decades, making it supremely difficult if not impossible for residents to buy homes or escape poverty.

Redlining can also refer to insufficient municipal services. In the Fruit Belt, dozens of sinkholes have cropped up in recent years, often going untended by the city for unacceptable lengths of time. Barr attributes the problem to the medical campus and the massive waterflow it demands it puts on Fruit Belt’s aged water system, with residents suffering the consequences.

“The city has come through, and they’re putting in new hydrants and it’s beautiful, right? But if they’re not repairing what’s underneath the streets first, what difference is it going to make?” she wondered.

For others of its problems, Barr blames an economy that no longer values the individual contributions of the people who comprise its workforce.

“You are very much aware when you work at a site where you’re not valued, and your work is not valued. At some point, you’re going to get discouraged.”

That disrespect and the discouragement It breeds, Barr contends, is contagious and permeating. If you’re hard pressed to take pride in your work because your work doesn’t take pride in you, that indignity carries over into your self-perception and your interactions with others, which in turn compromises their dignity. It’s a vicious cycle that wears at the bonds of community.

As president of the Fruit Belt Advisory Council, Barr has been working hard to disrupt the cycles and forces that have been holding her community back. Most recently, she was instrumental to the organization of the F.B. Community Land Trust, which last year secured an agreement with local officials to assume ownership of a number of city-owned parcels for the development of affordable housing and commercial enterprises. The transfer is part of a larger strategic development plan for the neighborhood that assures the Fruit Belt community a say in how the land is used.

Barr, for one, would like to see the Fruit Belt once again be self-sustaining, with a community center that serves the precise needs of surrounding residents and a healthy retail and service economy like the wealthier, unmarginalized neighborhoods of Buffalo. The talent is there, she says, they just need help making a livelihood of it.

Recent developments with the community land trust give her hope that the days of outsiders profiting off of her community are numbered.

“It’s coming. And that’s a beautiful thing because, you know what? For my neighbor that lives across the street from me that’s probably in her late 80s or early 90s, I want her to see, in her lifetime, that her efforts and sweat equity have not gone to waste. I hear that clock ticking in my head all the time.”