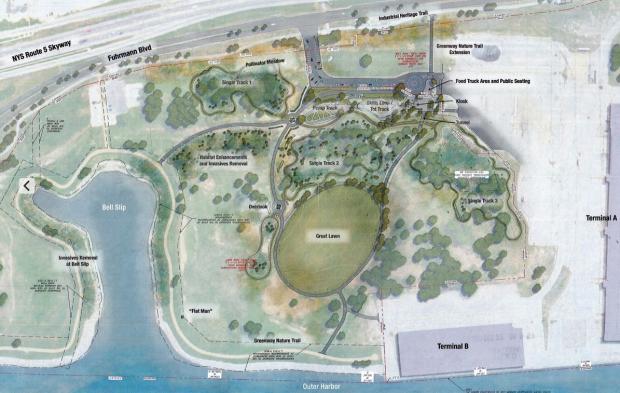 This coming Tuesday, 16 January, 2018 the Buffalo Common Council Legislative Committee and the City of Buffalo Planning Board will hold seperate Public Hearings on a signficant new plan for the southern end of the Buffalo Outer Harbor. The plan has been created by a consultant team, Trowbridge, Wolfe, Michaels,  Landscape Architects for the Erie Canal Harbor Development Corporation (ECHDC)

The Planning Board meeting is at 4pm on the Office of Strategic Planning Conference Room on the 9th floor. Click Here for Agenda.

The proposed project is a new design for the Southern end of ECHDC owned property on the Outer Harbor. The parcel lies to the south of the Bell Slip and stretches to the parking lot at between Terminal’s A &B. (Near the Flatman sculpture)

The project involves new trail construction, habitat improvements, and increased public access opportunities.  It also includes a significant “urban bike park.” which includes 1.75 miles of dedicated bike trail. Initially, this facility was described as a “Mountain Bike Trail” and was to be located in the sand barren habitat just north of the Bell Slip.  Citizen activists decried the potential destruction of this fragile habitat which contains rare native plants, pollinators, and birds and urged the ECHDC to move the “Mountain Bike Trail” to another location. Many Outer Harbor users were concerned that a large portion of the Outer Harbor, using public money, and  dedicated to a Mountain Bike Trail would service a limted user base.  The ECHDC responded by meeting with stakeholders, moving the bike facility to the new location, and repurposing it as a “Urban Bike Park” with a number of features that would attract a broader portion of the recreational biking community.

For more details on the plan, click on the links below.

You may remember that the original plans promoted by the ECHDC for the Outer Harbor included privatizing much of the area from the Times Beach Nature Preserve to Terminals A&B. this included a massive effort to build condo and gated communities in Wilkeson Pointe Park, on the NYPA property across from Times Beach Nature Preserve, and throughout much of the other Outer Harbor area including the Michigan Ave Pier and the Seaway Piers site to the Bell Slip.

There was a terrific public outcry including supporters of the nature preserve and supporters of promoting broader public use of public owned lands. At the time, the State was poised to spend millions of public dollars to provide shovel ready sites and tax abatements to private developers.

Activist led campaigns promoted targeting downtown Buffalo and properties across the Buffalo River to create urban density, while leaving the Outer Harbor green and open.  GreenWatch argued that creating sprawl on the Outer Harbor was an expensive and unsustainable option. Instead we argued,  creating and protecting public spaces including natural conservation areas and public recreational areas would improve the quality of life for all residents and would make more people want to live and work in our region.  We argued that an improved tax base from downtown density would pay for the great resource that we could uniquely create on the Outer Harbor.

The Our Outer Harbor Coalition, a group that was formed two years ago to champion the voice of the public regarding state plans to develop the Outer Harbor is pleased with the new plan.

They have issued the following statement:

The Our Outer Harbor Coalition has been meeting with the ECHDC and the consultants (Trowbridge, Wolf, Michaels Landscape Architects) on the development of this plan.We note that this plan moves the previously announced “Mountain BIke Trail” out of the fragile Bell Slip/Seaway Piers habitat, and to the South Side of the Bell Slip. It also rebrands the trail as an Urban Bike Park. We believe that this will open up the user base to a broader public biking community, an important user group of Outer Harbor recreational facilities.

The new plan also envisions something of a permanent “festival grounds” associated with existing traffic and parking infrastructure affiliated with Terminals A & B. Eventually the plan seeks to move festivals and events away from the Seaway Piers area and into a more accessible and less fragile site. This will improve access, lessen congestion, and help to conserve natural features. We thank the ECHDC for the progress made to date and for incorporating many of our recommendations into the current plan, including moving and redefining the Bike Park out of the re-naturalizing Bell Slip area; removing the Visitors Center from the Bell Slip Area; adding habitat restoration elements; shifting festivals to this portion of the Outer Harbor; repurposing one of the terminal buildings; and protecting the public from contamination.Overall, the Our Outer Harbor Coalition approves this plan with the following caveats: