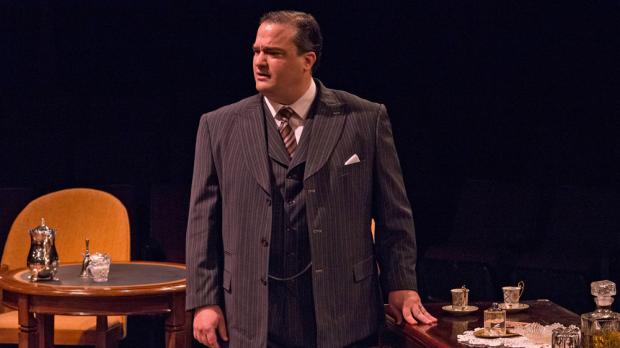 Currently playing Richard the Lionheart in James Goldman’s play The Lion in Winter at the Irish Classical Theatre, Matt Witten is a formidable figure in the Buffalo theater scene. He recently played Vince Lombardi, the indomitable and tireless head coach of the Green Bay Packers in Lombardi, at 710 Main for MusicalFare.

Last season, he won an Artie for his one-person tour de force in An Illiad at Road Less Traveled. A character actor with the presence of a leading man, Witten is known for his meticulous preparation and the vivid muscularity of his performances. He is a perfect choice to take on the violent and brooding son of King Henry II of England and his estranged queen, Eleanor of Aquitaine, a man hell-bent on ascending to the throne.

What word would your friends use to describe you?
Approachable.

What quality in your current character is most unlike your own personality?
Ruthlessness.

What quality in your current role is most like your own personality?
Moodiness.

When and where were you the happiest?
Touring Europe with Jesus Christ Superstar.

What is your idea of hell on earth?
Bounce Magic Birthday Parties.

What is your greatest fear?
Failing as a father.

Which talent do you most wish you had?
The ability to conduct an orchestra.

What superpower do you most wish you had?
Underwater breathing.

What would you change about your appearance?
I would like to be able to grow a full beard.

What trait do you most dislike in others?
Trying too hard (to impress, to fit in, etc.).

What do you most value in your friends?
A sense of humor.

What quality do you most value in a good director?
Confidence.

What is your guilty pleasure?
Watching Diners, Drive-ins and Dives.

Who is your favorite fictional hero?
Don Quixote.

Who is your real-life hero?
My wife. She’s the best.

What do you consider to be the most overrated virtue?
Integrity.

On what occasion do you lie?
When in conversation with a Jehovah’s Witness at my front door.

What was the subject of your last Google search?
Krampus.

If you come back in another life, what person or thing would you like to be?
A hermit.

What role, in which you will never be cast, is perfect for you?
Elsa in Frozen.

What is your motto?
There is no defeat except that in no longer trying.