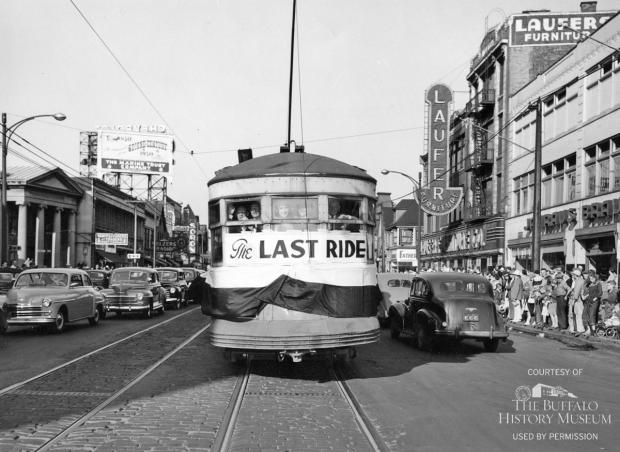 The dismantlement of the streetcar industry after World War II was an event that took place at the same time in nearly every American city. The International Railway Co. (IRC), established in 1902, operated the network of streetcar lines that served Buffalo, Niagara Falls, Lockport, and the suburbs.

By 1930, this network included more than 900 streetcars on a staggering 415 miles of track. The conversion from streetcar to “modern buses” began in 1935 as a cost-saving measure, a prelude to the IRC’s declaration of bankruptcy in 1947. By 1950, when Niagara Frontier Transit, Inc., took over the system, only six streetcar lines remained in operation.

The last three—the Broadway, Fillmore-Hertel, and Genesee—were abandoned and replaced with buses on July 1, 1950, the date of this photograph. “One of the world’s cruelest instruments of torture, the Buffalo trolley, became one with Gen. Custer last night on a belated last stand in the Broadway-Fillmore area,” wrote the Buffalo Courier-Express. “Not since Ivan the Terrible was planted head down in seven feet of Russian tundra has there been such a cheerful wake, so many hundreds of smiling mourners, such general jubilation at the final and irrevocable demise.”

The remaining 175 streetcars were brought to a depot on Military Road, disassembled, and burned.