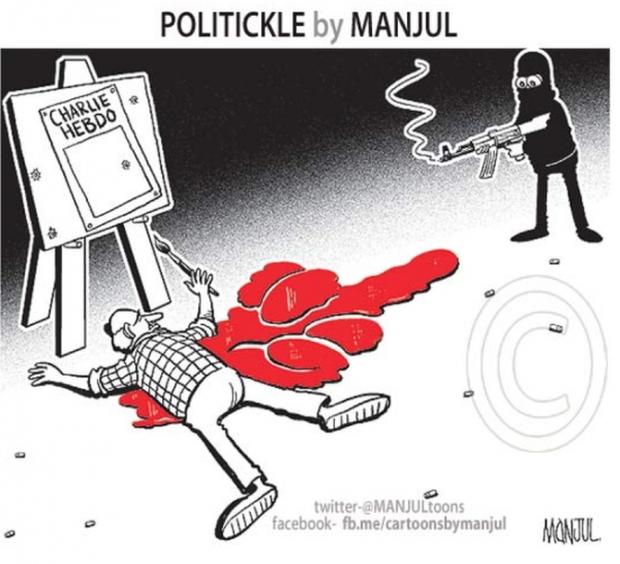 The murders were no more a Muslim event than the murder of Israel’s prime minister Yitzhak Rabin in 1995 by ultranationalist Yigal Amir was a Jewish event. Extremists do extreme things. They do not represent or document or place the rest of us.

That is what the Paris demonstration was about. It was Paris saying, We are not going to let you own us. It was a bigger turnout than the Liberation of Paris at the end of WWII.

Every time I’ve been in Paris in recent years and have picked up Charlie Hebdo, I have had the same sequence of thoughts: 1) bloody outrageous; 2) this warrants thought. I’ve long thought the Charlie Hebdo gang comprised the best anarchists I know. For them, there were no sacred cows. No sacred icons. Every copy of Charlie Hebdo I have picked up, every page would strike me as outrageous. Every week challenged in graphic terms whatever -ism you took delight in. Turn the page and another sacred cow was skewered.

The Charlie Hebdo people held nothing sacred. Which means they thought everything really deserved thought, not blind obedience. The way they signaled it was through humor. The grounding idea there was and is that if you can’t view the world with some humor, you are in dangerous territory. You are a person who lacks irony. A person who lacks distance.

What happened this past week in Paris has critical resonance for us in the US. After 9/11, we pretty much turned into a fascist nation. We started a war (in Iraq) for which there was no justification. We hardened our borders. If you live in Buffalo, you no longer make casual trips to Canada. If you live on the southern border or work there (as I have the past three years), you get used to roadblocks, searches, paperchecks. Our cops are far more armored than they were before. We are far more paranoid than we have been any time in my lifetime, even during the lunatic McCarthy years. Almost seven million of our citizens are in jail or prison or are on probation.

So what will happen now in France? Paris has the largest Muslim community of any city in Europe. Most Parisians think of them as Parisians. Most of the Paris Muslims think of themselves as Parisians. Which they are. Will the French go crazy, as we did after 9/11, or will they insist on sanity and civility?

The French have an election coming up, which will no doubt answer that question: One candidate is a liberal, the other a neo-Nazi.

When 9/11 happened, we could have defined it as a criminal event or as an international political event. The US government chose the latter and went to war. It was, I think, a profound mistake. What if we’d decided that was a criminal event? Several key people in the Justice Department argued for that. They lost.

We have huge power. The fact we have it does not mean we must, in every instance, utilize it.

There have been a lot of political cartoons in Europe this past week as a result of the Charlie murders. My favorite is this one, by Manjul, which portrays the editor dead on the floor, but his bloodpool saying a final “fuck you” to the murderers. We should not let them triumph.