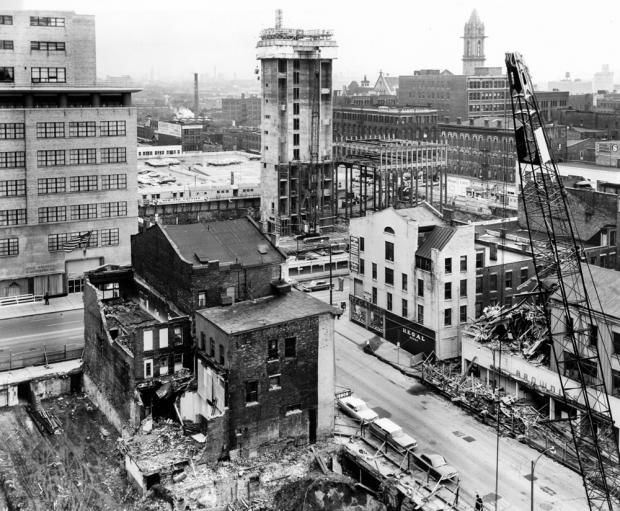 The year is 1965, and work is underway on the Main Place Renewal Project—an urban renewal scheme that destroyed Shelton Square and eight blocks of least 81 buildings between 1964 to 1968. Here, at Main and Eagle streets, a Buffalo Courier-Express photographer captures the murder in progress. Three blocks of Main Street between the Liberty Bank and Church Street are being sent to the landfill. The block on the east side of Main Street between Eagle and North Division streets is already demolished, with new construction proceeding. In 1966, the New York State Department of Transportation would begin destruction of the three blocks between Main, Oak, North Division, and South Division streets, visible on the right, for the Church Street Extension Mall. A messy, complex ecosystem of mixed-use buildings—the ingredients for downtown vitality—would be replaced with a total of three buildings (M&T Plaza, Main Place Tower, and Edward A. Rath County Office Building), a bus staging area, and grass.

The project sponsors—bankers, department store owners, architects who had much to gain from lucrative commissions, and their politician backers—claimed the project would revive the Main Street shopping district. Jane Jacobs predicted that such renewal schemes would not revitalize downtowns, but deaden them. She described the projects in a 1958 article in Fortune magazine, “They will be spacious, parklike, and uncrowded. They will feature long green vistas. They will be stable and symmetrical and orderly. They will be clean, impressive, and monumental. They will have all the attributes of a well-kept, dignified cemetery.”