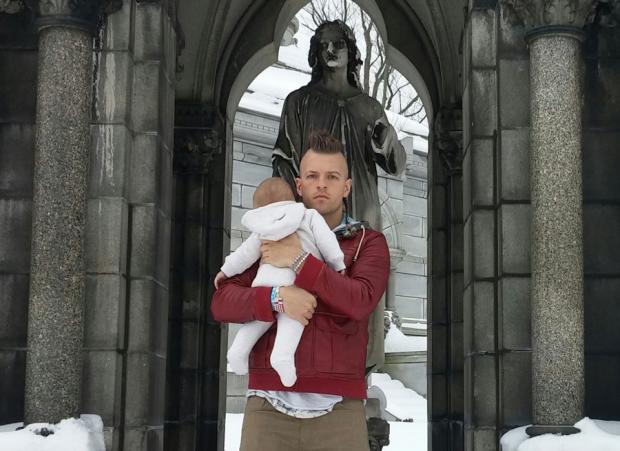 Everything Jeremy Jermaine Jerome does forever alters the course of human history. Technically speaking, this is true of all people. Many of us have probably even felt connected to this principle at some point in our lives. We were taught or became spontaneously aware of our interconnectedness, of the primordial fact that each of our actions and decisions have an enormous impact on the world at large… blah, blah, blah.

What distinguishes Jerome from the majority of us, however, is that he isn’t jaded by this miraculous facet of life. It has even become somewhat of a mantra for him. Jerome doesn’t take his existence for granted. After spending an hour with the self-described avant-garde recording artist and proud father of five months, one thing becomes as clear as the unhinged glint in his left eyeball: Jerome is one of the most self-confident people I have ever met.

“I’m one of the most dangerous artists in the world,” he says squinting. His daughter Lyric, “the product of an immaculate conception,” bounces gleefully on his knee. His eyes are fixed on some distant point over my shoulder, somewhere in the far blue yonder. “I’ve got nothing to lose and everything to gain. How much more ammunition do you need to execute your shot in life?”

Far from being a foul-tasting social faux pas, this sort of brazen self-confidence should probably serve as an inspiration to the self-doubter in all of us. And yet according to Jerome, his grandiose artistic endeavors and radiating enthusiasm have been met with increasing levels of animosity from members of the press and local music community. He explains that critics and haters perpetually overlook the depth and brilliance of his lyrical constructions, rhymes stuffed so full of symbolism that Bob Dylan himself might have a hard time unpacking the fullness of their meanings. Jerome proclaims that to truly make sense out of what he does one must examine him through a telescope.

Instead of being enticed to pay closer attention to the local wildcard, it seems that many are annoyed and put off by Jerome’s passionate pursuits. Come to think of it, I even notice myself becoming slightly agitated sitting in the wake of his high energy jaunt, which slaloms between motifs on the nature of true success and his faith in the people of Buffalo. And yet the more I become aware of my own irritation, and the deeper I listen to the man speak, the clearer it becomes to me that his words are grating largely because of the way in which they challenge my own long-held doubts and insecurities about this town.

As I begin to wrestle with these philosophical implications, Jerome’s voice rolls on. My eyelids flutter as I feel my thoughts drifting further and further away from the finite details of our conversation, up and out of the room. Like an East Indian reed is to a snake in a basket, his words are becoming something of an esoteric thought propellant. I find myself floating above in a nebulous realm, taking his prescribed advice and exploring him through the telescopic lens of greater contextualization. The man is rapidly appearing less as an industrial rap artist and more as an invaluable archetype worthy of study. My inner Plato scratches his long white-bearded chin.

For as much as he sings his own praises, Jerome equally boasts and celebrates the love and support he has received in Western New York, referring to it as a mecca of creative individuals and boundless opportunity. Perhaps it is for this reason that to some Jerome comes across as a sort of idealistic clown, a delusional jumble of fragmented ramblings and resin clogged pipe dreams. After all, he is a man quite clearly infatuated with the concept of success in a town where sports fans traditionally drink in celebration of nearly reaching the playoffs. He doesn’t have a big record deal to flaunt nor a remarkable number of fans, so shouldn’t he be tucking his tail between his legs and succumbing to a life of defeat and bitter cynicism like the rest of us? Isn’t that the Buffalo way? Perhaps it’s time that we have an intervention with the wide-eyed artist. Perhaps we should all circle him like a band of wild pirates, chanting in unison “Bow your head to the demons of defeat! Settle for mediocrity!” and then bash his optimistic skull in!

“Are you falling asleep?” he asks me, evidently noticing that my eyelids are gyrating obtusely. I assure him that I’m paying attention and ask him to please proceed. He is now filling me in on some of his top secret plans for the epic concert that he is set to perform this Sunday, January 18 at Asbury Hall. In the world of Jeremy Jermaine Jerome, the show is going to be huge for a number of reasons: Not only will it be his first performance in over a year, but it will go down at what Jerome refers to as “one of the most prestigious venues in the city.” One dimension of the concert that Jerome isn’t entirely confident will be epic, however, is the audience turnout. When I ask him how many people he expects to attend, his answer is multi-layered. ”There should be no reason why this show is not sold out (…) it is going to be something unforgettable, and regardless of who’s there the plan is going to be executed.”

Jerome says that simply being able to see his visions come to life on stage is the end goal which motivates him to do what he does. He sees Asbury Hall as a worthy platform for realizing the scope and magnitude of those visions. ”The true success is what I get to accomplish on that stage. I get joy out of being able to attempt these things.”