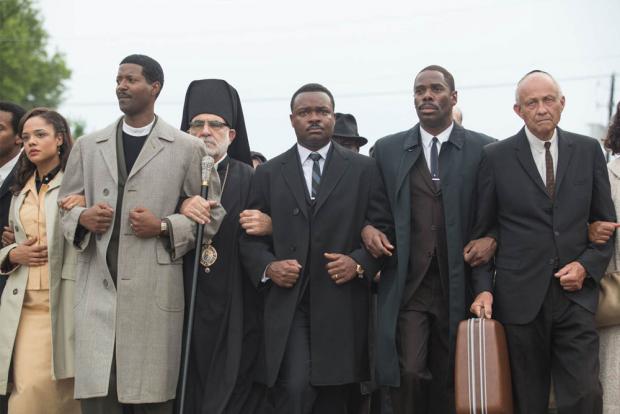 Recently out on the publicity trail on behalf of her movie Selma, about Martin Luther King, Jr. and the drive a half-century ago to gain voting rights for blacks in the American southland, director Ava DuVernay has told a story about one person’s reaction to it.  According to DuVernay, one of the movie’s producers was approached by an African-American youth who told him that Selma had made clear to the boy what “MLK” meant.  “You mean what he meant to the nation?” the producer asked.  No, the young man replied, what these initials he’d so often encountered stood for.

This little story, apocryphal or not, does point to the real educational potential of her movie (particularly given the sad lack of historical and political knowledge in America, especially among the young, black and white).  Selma can only have an enlightening effect, generally.  It’s a solidly, often compellingly achieved recreation of a crucial period in King’s life and this country’s history.  The picture is devoted to the events leading up to the 1965 march from Selma to Montgomery, Alabama, the capital, to protest the denial of the vote to the great majority of the state’s African-American residents.  DuVernay’s movie is thus not just a portrait of King (David Oyelowo), it’s about a prime movement and a critical, volatile historical moment.  King is at the center of Selma, both the great public leader and symbol and the private man, but he’s presented as part of an increasingly diverse and populist campaign in this movie’s unusually clear and sophisticated narrative.  DuVernay and her co-writer Paul Webb (she’s uncredited for the script) keep a focus on King’s crucial leadership, but they haven’t slighted the scope, details and difficulties the drive for voting rights entailed.  Selma has a rather refined and conscientious approach to the historical record – with one significant lapse – even as it necessarily edits and condenses it.

The tension between King’s Southern Christian Leadership Conference and the Student Non-Violent Coordinating Committee, which started the voting initiative in Selma, is given a fair and lucid part in the storyline.  Selma even pauses at a couple points to give recognition to the deep-rooted social and economic inferiority of America’s black citizens in the 1960s, a plight, King tells the Rev. Ralph Abernathy (Coleman Domingo), that won’t be much alleviated just by access to the ballot.

Where DuVernay and her movie stumble is in starkly exaggerating President Lyndon Johnson’s (Tom Wilkinson) resistance to sending a voting rights bill to Congress.  Selma manages to push its Johnson nearer the opposition and to King’s enemies, including the odious FBI director J. Edgar Hoover.  In one brief scene it even seems as if he might be about to collude with Hoover in sending Coretta Scott King (a fine Carmen Ejogo) recordings of her husband’s alleged trysts with women in bugged hotel rooms.  As Selma somewhat inadequately acknowledges, Johnson’s reluctance was based upon his assessment of the timing and political opposition.  Selma’s distortions aren’t anything like Oliver Stone’s demagogically irresponsible accusations against Johnson in his wretched assassination conspiracy movie JFK, but they’re out of sync with the movie’s otherwise even-handed and dramatically convincing storytelling.

DuVernay’s direction is assured and incisive.  The movie’s large-scale centerpiece, the confrontation of state troopers with the marchers on Selma’s Edmund Pettus Bridge, and the violent dispersal of them is dynamically riveting and frightening, a triumph of staging, camera work and editing.

Oyelowo’s King is a measured, subtle performance.  His resounding speech making is in pointed contrast with the private, quietly troubled King.  (The speeches aren’t in King’s actual words because his litigious, quarrelsome children wouldn’t permit their use.)  Wilkinson, however, doesn’t seem to quite have got the hang of his role; his Johnson’s delivery is a little awkward and inconsistent in his Texas accent, surprising from such an accomplished actor.

Selma has earned a place among the very few respectable and involving American movie treatments of historical characters, forces, and events.