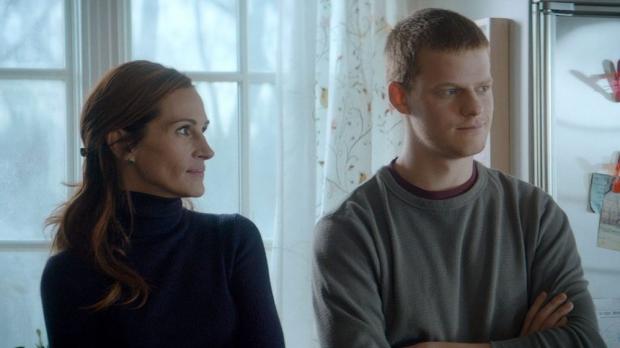 If you go to the movies on a regular basis, your likely reaction to the first reel of Ben is Back is likely to be déjà vu: it’s like a scene from the recent Beautiful Boy, starring Steve Carell as a father trying to deal with the seemingly terminal drug addiction of his teenaged son (Timothée Chalamet). Both are set in a upper middle class area of upstate New York, and both deal with hard questions of dealing with a child who has proven time and time again that addiction has made him untrustworthy.

If you ask me, Ben is Back is by far the better film. Beautiful Boy was based on memoirs written by father and son, and facts don’t always make for good drama in cinematic terms. The action of the new film takes place in a single day, during which writer/director Peter Hedges (Dan in Real Life) compacts a compelling portrait of a family dealing with an impossible situation.

The first half of the film is structured like a mystery: is the titular Ben (Lucas Hedges) sincere or is he trying to manipulate the people who love him, especially his mother Holly (Julia Roberts)? When Holly and her daughter arrive home from holiday preparations on Christmas Eve, they’re surprised to find Ben waiting in the driveway. He has been in rehab, and only his mother is happy to see him: the rest of the family is unwilling to forgive his bad behavior, which we learn about over the course of the movie.

Holly agrees to let him spend Christmas at home under strict conditions, most of which go unmet. This is not a weakness of the script; rather, it’s an indication of how hard it is to make rules and stick to them in a case like this.

The film’s second half sends Ben and Holly out into the streets as the boy’s past catches up with him and Holly learns more about her son’s deeds as an addict than either of them ever wanted her to know. It’s an accumulation of information that is carefully parceled out: we are troubled by Ben’s misdeeds at the same rate that we come to care about him as he looks for a way to redeem himself.

The pacing is the key element here by which the film engages our sympathies for these characters without sinking into melodrama. And it is expertly played by both Roberts and Lucas Hedges, son of the writer/director. The ending is ambiguous in a way that suggests the elder Hedges couldn’t really decide how to end this story, though it’s an improvement over Beautiful Boy’s non-ending. Now playing at the Dipson Amherst at Flix theaters.