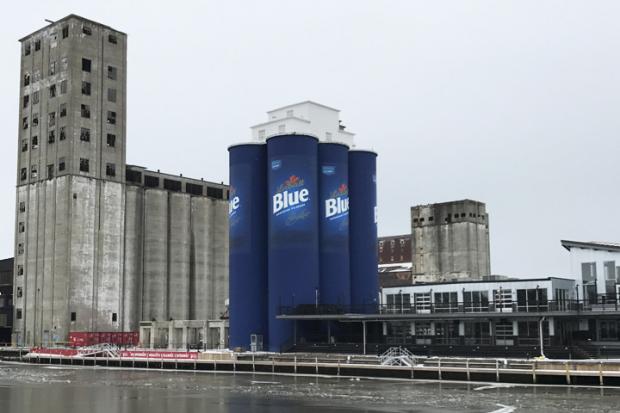 Considering that Buffalo is the birthplace of the grain elevator and home to the world’s largest collection of them, the upcoming brewery at Buffalo RiverWorks could hardly be more fitting.

The brewing operation, which is expected to open by next spring, will be housed entirely in six grain silos that were recently painted to resemble a six pack of Labatt Blue, known colloquially as the silo six-pack.

“It’s the only brewery that’s been built into a grain silo in the world,” said Chris Herr (pictured), chief brewer at the Pearl Street Grill & Brewery’s operations, which includes the Pan-American Grill & Brewery in the Hotel Lafayette and the large RiverWorks site. Unsurprisingly, converting six, 21-foot-wide silos—made of Rebar-reinforced, hardened concrete—is no easy feat. Work has been underway there since March, and has hit several delays.

“Everything in this is custom-made and custom-cut, which in the world of construction just means slow and expensive,” Herr said.

In some places, contractors had to cut through several feet of concrete to open holes for doorways and running wires and lines. For doorways, contractors used a diamond-encrusted wire saw, which they ran through holes drilled into the concrete. For other cuts, they used a gas-powered concrete saw.

“Every time they hit a piece of Rebar they would have to change the blade. For some it was as many as six times,” Herr said.

Fitting the equipment into the relatively small space of the silos was another challenge. Crews had to construct second levels throughout to make room.

Meanwhile, equipment like fermentation and storage tanks — which often weigh thousands of pounds — had to be moved into the silos on ground level, hoisted up by chains to the second floor, laid on their sides, slipped into the brewing space and pushed upright. Herr called likened it to the “world’s largest game of Tetris.”

The location of the brewery also required about two total miles of insulated beer lines, with the largest single line coming in at about 300 yards. Work crews installed a system of line chillers to keep the beer cool on its journey from tank to glass.

“A brewery is a relatively large operation and requires a fair of floor space and infrastructure,” Herr said. “Those silos are only 21 foot in diameter. Your typical brewery might be in a warehouse, and we’re trying to build it into a grain silo.”

Herr acknowledges that it would have been far cheaper, faster and easier to construct the brewery in a more traditional space. But RiverWorks developer Doug Swift, an architect, and Pearl Street group founder and owner Earl Ketry wanted a uniquely Buffalo brewery.

“I think a big part of it was the cool factor. We wanted it to be a unique facility. And I think the fact that it’s the only brewery built into an existing grain silo,” Herr said.

Once it’s opened, the RiverWorks brewery will offer eight unique beers, including three rotating seasonal selections, as well as Trainwreck Amber Ale—the Pearl Street group’s signature beer. The brewery has an annual production capacity of just over 2,000 barrels, or about 62,000 gallons, but Herr says they are anticipating a production of about 1,500 barrels.

Come spring, patrons will be able to enjoy a beer in the RiverWorks Beer Gardens, an outdoor seating space among the ruins of former grain silos, or on a second floor patio which connects the silos to the main restaurant and event space. One section of the silos has been converted into a bar that opens directly to the Beer Gardens.

Herr is currently working on the beers he will brew to include at the new space. So far he has settled on two, a cream ale and a New England IPA, which debuted at RiverWorks Brew Year’s Eve party.

From then on, the beers will be available at Pan American Grill and Pearl Street as seasonal selections, and at RiverWorks until it runs out.

Herr hopes that the soft release will build anticipation and help them perfect the recipe before the RiverWorks brewery is up and running.

“Anytime we brew a new beer we’re always looking for feedback,” he said.

The silo space will also house a distillery that—like the brewery—will be served primarily in-house. Herr plans to begin with vodkas and gins, and perhaps eventually produce rums and whiskeys as well.

But craft spirit aficionados should not hold their breaths on the RiverWorks distillery. Herr said they first want to perfect the brewing operation, which may take months given the unique space and complexity of the operations. All told, it may be a year or more before you can order a RiverWorks cocktail with the restaurant’s signature spirits.

“We want to establish the brewery and the operation here, and get a year of brewing under our belt,” Herr said. “It’s quite an elaborate operation here, so there’s going to be a lot of kinks to iron out for the first couple months.”

The future RiverWorks distillery will not be alone there. The neighborhoods near the First Ward already boast Lockhouse Distillery, and sometime next year, will add the Barrel Factory.

Altogether, it’s part of a remarkably rapid resurgence of an area that seemed to have seen it’s best days decades ago. Recent years have seen a surge in new restaurants, breweries and distilleries and apartments along the Buffalo River, as developers hope to take advantage of an influx of activity, particularly during the summer months.

Herr said they hope to keep that momentum going at RiverWorks, by bringing larger events and national touring acts to the riverfront.

“It’s kind of incredible when you sit here at lunchtime on a Tuesday, and you can watch 300 people in kayaks or boats moseying on down the Buffalo River. It’s just something that didn’t happen five years ago, two years ago even. It’s been really exciting to be part of the growth and part of the culture that’s being formed downtown on the waterfront.”