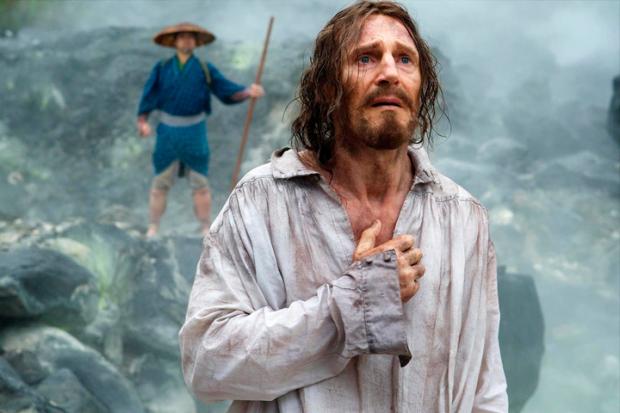 So many movies, so little space…

As a filmmaker, Martin Scorsese has two sides: the entertainer who makes bravura, sometimes ostentatious spectacles about outsized characters, and the arthouse fan who emulates the great European directors of the 1950s and 1960s that he grew up watching.

While these two sides aren’t mutually exclusive, Silence is wholly in the latter camp. That it will be showing in mainstream multiplexes speaks party to his clout with a major studio (Paramount), and partly (I think) to that studio’s hopes that it can cash in on the market for independently-financed Christian movies that have been doing well in chain theaters in recent years.

The film is based on the 1966 novel by Shūsaku Endō, which Scorsese discovered while dealing with the difficult reception of The Last Temptation of Christ. The novel takes place in Japan in the mid 17th century, when the feudal rulers were working to stamp out Christianity. Along with torture and murder, their tactics including getting missionary priests to publically renounce the faith, or “apostatize.” Following a report that prominent Portuguese missionary Father Ferreira (Liam Neeson) has apostatized, two young priests, Father Rodrigues (Andrew Garfield) and Father Garrpe (Adam Driver) head for Japan to investigate. Their journey is hard, and their arrival harder, as they are asked to minister to dirt-poor Christians who have gone underground. Eventually Rodrigues is captured and subjected to the same pressures to renounce. As he witnesses the torture of others, he is tormented internally by the silence of God, who permits these things to happen.

That Scorsese has been trying for thirty years to film this story speaks to what the project means to him. Yet sitting through its two hours and forty minutes, I often felt that the material had become too familiar to him and his co-screen writer Jay Cocks. There is little historical context, reducing many of the Japanese characters to an unfortunate, brutal stereotype. And too much of what is left will strike most filmgoers as abstruse arguments about the nature of faith. (Non-believers are likely to find it all almost entirely pointless.)

Even at its unnecessary length, Silence is seldom boring—Scorsese (working mostly with longtime collaborators) is too skilled a filmmaker for that. But neither is it particularly engrossing, unless you’re a theologian. He has done a number of interviews about the film that provide some useful context—there’s an extensive one in Commonweal that is well worth reading before you see the film, if you decide to tackle it.

You just never know where you stand with a Paul Verhoeven movie. The Dutch-born director with a penchant for shocking audiences with sex, violence, and occasionally both was an arthouse favorite (Soldier of Orange, Spetters, The Fourth Man) before Hollywood success with RoboCop, Total Recall, and Basic Instinct. The degree to which his films critiqued the very audiences who were eating them up remains open to debate, and one suspects that’s just the way he likes it.

Made in France, his new film Elle has been hailed almost entirely for its leading performance by Isabelle Huppert, in a role that no other actress could probably have pulled off. As Michèle, a former publisher with respectable literary credentials who now runs a successful video company specializing in borderline pornographic games, she is at the center of a straight-faced satire of bourgeois mores that gets more lurid with each reel. And that’s after the film opens with her being raped in her Paris living room by a masked intruder.

Based on a novel by Philippe Djian (Betty Blue), Elle sometimes seems like an example of the old game in which one person starts a story and passes it on to successive people to continue. Its parade of melodramatic twists start to feel arbitrary well before the movie is half over. That Michèle handles them with such unvarying sangfroid at points reminded me of one of those early John Waters movies where Divine is subjected to an endless parade of indignities. But whatever your reaction to the plot, it’s undeniable that watching Huppert defy any expectation you have of her characters makes up for the piled-on nature of the plot.

Given the number of films that have been set there in the past decade, it seems that I am not alone in my fondness for the city of Boston, where I went to school for a year a long time ago. Two more hit local screens this week. Patriots Day is the inevitable retelling of the 2013 Boston Marathon bombing, recreating the attack itself and the investigation in which local and federal agencies collaborated to locate and capture the two perpetuators. It’s been less than four months since the same director, Peter Berg, did the same thing with Deepwater Horizon, and you have to wonder what it is in audiences that wants to replay such horrible events: Is it that watching a movie about them allows us to feel that we have grasped them? If so, I can’t agree that it’s a good thing.

Live by Night reunites two Boston boys, Ben Affleck and writer Dennis Lehane, whose novel Gone Girl Gone was the source of Affleck’s excellent directorial debut. This one is a gangster drama that starts out in The Olde Town in the years after World War I, with Affleck as Joe Coughlin, war-disillusioned son of a cop (Brendan Gleeson) who goes in for a life of crime. The bulk of the movie shifts to Florida, where Joe takes over the rum racket. It’s a chapter of Prohibition that hasn’t been told in many films, and Lehane’s story is rich in details, so much so that I wish he had developed it in to a cable miniseries a la Boardwalk Empire. Too much of what is interesting here is developed only to be dismissed with a line or two of narration, and the ending seems tacked on. Affleck has done better work, both in front of and behind the camera; he’s adequate, but the movie is stolen in a brief appearance by Elle Fanning as a would-be actress turned temperance leader.