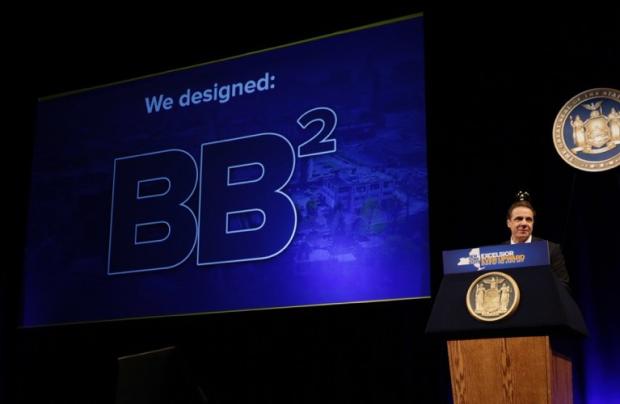 Gov. Andrew Cuomo appeared to be in a good mood during his visit to Buffalo Monday afternoon for the second leg of his State of the State tour.

Joking at times with the head of Empire State Development, Buffalo developer Howard Zemsky, Cuomo proposed an ambitious plan that includes providing tuition-free college education, coming to an agreement on ride sharing for upstate communities and spending $650 million to expand the state’s growing life sciences sector. The governor often returned to the theme of upstate finally getting its due under his leadership after decades of neglect, a message that has been central to his public image for several years.

“What is the state of the state this January 9th?” Cuomo said. “It is stronger than it has been in decades and nobody knows that better than you in Buffalo know that.”

But Cuomo’s big announcement to the largely friendly crowd, a second phase in his signature Buffalo Billion economic development initiative that would see another $500 million invested in the region, will move forward under a dark cloud. With the indictment of top Cuomo aides and beneficiaries of the state’s economic development projects moving forward through the courts, the future prospects for the program remains to be seen.

While the announcement of the additional funds was met with great applause by the crowd, one man stood up during the speech and screamed “traitor” and “corruption” at the governor, even referencing Louis Ciminelli, one of the developers charged in the federal bid rigging probe linked to a major project funded with Buffalo Billion money.

“Ciminelli’s going to flip on you,” the man shouted before being led out of the auditorium.

The governor enters the legislative session with tensions bubbling from both chambers of the state legislature. While state Senate Majority Leader John Flanagan has not hidden his displeasure with Cuomo, Assembly Speaker Carl Heastie has been more diplomatic, even if news reports indicate his members are still furious with the governor over stalled talks on a legislative pay raise.

Cuomo did take one shot at state legislators, saying that most Albany lawmakers, most of whom hail from New York City and the surrounding area, would prefer to abandon the governor’s regional economic development councils because they put too much control in the hands of the communities that are receiving the money.

“The legislature doesn’t like it, because they liked it when they got to make the decisions,” Cuomo said.

While the governor is running up against challenges downstate, he spoke of the opportunity to build on what he began with the Buffalo Billion. Cuomo spent the majority of his speech noting positive gains in wage growth, employment and a growing number of young people in the city.

As Cuomo prepares for a possibly trying year, he praised the people of Buffalo for their resilience over the years, crediting them with what he has described many times as the region’s successful turnaround after years of decline and promising that, if they continue to work with him, things will continue to get better.

“You ain’t seen nothing yet,” he said.