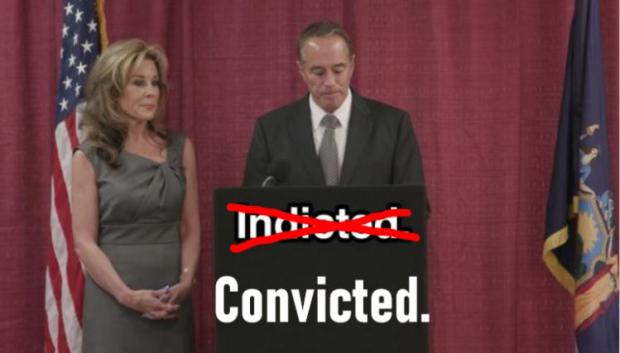 I write to you as a former constituent of Christopher Collins, the Defendant in the above-referenced matter. I am an attorney duly licensed in the State of New York and am also admitted to the United States District Court for the Southern District of New York.

I have also been a political commentator in western New York area since 2003. During that time and in that role, I observed and chronicled this Defendant’s tenure in public office – first as Erie County Executive, and later as the Congressman for the 27th District of New York.

Recent media reports indicate that probation recommends a one year and one day prison sentence for the Defendant. I believe that this is woefully inadequate and wholly disproportionate to the crimes of which he stands convicted involving fraud and dishonesty.

There exists a certainty that the Defendant, who is also a successful businessman and investor, knew exactly what he was doing when he transmitted material, nonpublic information concerning Innate Immunotherapeutics’ MIS416 drug trial to his family, friends, and colleagues.  There exists a similar certainty that he knew or should have known that his behavior was wrong and illegal at that time.

Respectfully, this Defendant has always comported himself in his public affairs with hubris and arrogance. He quite simply saw himself as above the law, laced with condescension, self-promotion, and self-aggrandizement.

The Defendant took an oath of office pursuant to 5 U.S.C. §3331, which he disregarded through his fraud, theft, and deceit; but this Defendant regularly politicized his long-time affiliation with the Boy Scouts of America – an organization that also has both an oath and a foundational law to which this Defendant purported to adhere. The Scout oath is a promise:

On my honor, I will do my best

To do my duty to God and my country and to obey the Scout Law;

To help other people at all times;

To keep myself physically strong, mentally awake and morally straight.

Defendant Collins has violated this most basic, boyhood promise to do his best to do his duty to his country. He has violated the law through lying, fraud, and deceit. He did so knowingly in order to unjustly enrich members of his inner circle at the expense of other, honest investors. Rather than “help other people at all times,” this Defendant has gone out of his way — throughout his political career — to comfort the comfortable and further to afflict the already afflicted, by advocating for policies and laws that would help to enrich wealthy people like him, and punish the poor and underprivileged.

His tenure in office hardly justifies any paeans to “public service”. He was there for a political career that could help him and people like him – the wealthy and well-connected. His fraud and deceit is hardly evidence of being mentally awake or morally straight. He cannot follow the law of the Boy Scouts, much less the United States.

The Scout Law demands that a person be Trustworthy; Loyal; Helpful; Friendly; Courteous; Kind; Obedient; Cheerful; Thrifty; Brave; Clean; and Reverent. This Defendant may be loyal to his party and the ultrawealthy like himself, but he was never trustworthy, courteous, or kind in his public affairs. His crimes show that he was not obedient. His demeanor was seldom cheerful. His only bravery took place in order to advance his political career.

I have seen news reports that this Defendant is of “advanced age” and that he accepts responsibility for his crimes. He is 69 years old and of sound mind and body, not some feeble octogenarian. He has accepted responsibility pro forma, but shows no remorse for his crimes. Instead, he is sad for the effect they have had on his and his family’s reputations. He is sorry only that he was caught.

At the time he took his plea, he acknowledged that he knew that what he did was “illegal and improper,” yet he spent months claiming exactly the opposite. He claimed to be “sorry with regret,” but that had not stopped him from spending the period between August 2018 and 2019 predicting imminent and full exoneration. What sort of person knowingly exposes his own child to criminal jeopardy?

When confronted through this process with his criminality, this Defendant did not come clean or confess. He ran for re-election. He claimed total innocence. He spent months denying culpability and defaming anyone who suggested otherwise, including his political opponents. Not one act or omission of this Defendant’s was indicative of any acknowledgment of personal responsibility or contrition.

This Defendant’s attorneys are quoted in news reports as arguing that society will “gain no benefit” from incarcerating this “husband, father, and grandfather.” Then what of these crimes? In what way is home detention at a luxury Florida estate a deterrent to others who might engage in similar criminality?

The convicted Defendant did not serve me as Congressman with dignity or honor. His first instinct was not to obey the law, but to enrich his family, friends, and other “downstream tipees”, most of whom have somehow, miraculously, avoided legal responsibility for their own knowing criminality. This Defendant was never looking out for the people he was elected to serve. He was only looking out for his own wallet and to expand the reach and scope of his political influence.

Shame and humiliation should come naturally in a situation such as this. That is an emotional and mental process involving some degree of self-awareness and conscience. It is not enough that this Defendant feel merely shame and be confined to his mansion. This honorable Court must use this high-profile criminal as an example to others and uphold the law this Defendant so cavalierly ignored.

This Defendant’s fall is no surprise – it is what comes from such a conspicuous absence of morality and scruples. I spent years chronicling the ways in which he cheated and mistreated the most vulnerable people in western New York. I wrote of his petty arrogance – from misogynistic remarks he made to women, and illegally parking in a spot reserved for the disabled. He would attempt to disregard legislative vetoes as “null and void,” as if he was some sort of dictator. He would refuse to spend money that the legislature had duly allocated. He held private business meetings in his publicly funded office, and worked hard to ensure that people could not get the health insurance they need to survive. He played endless political games to grow his influence.

This Defendant knew he was guilty at the time of his indictment. He should have resigned immediately – that would have been the honorable and “morally straight” thing to do. Instead, he used his continued tenure in Congress as a bargaining chip – as leverage in this very case. He is – and will always be – a crook and a liar. He stole not only from the honest investors in Innate, but from the people in the 27th district who expect and are entitled to honest representation.

I urge this honorable Court to sentence this Defendant to the maximum possible sentence available under federal guidelines.