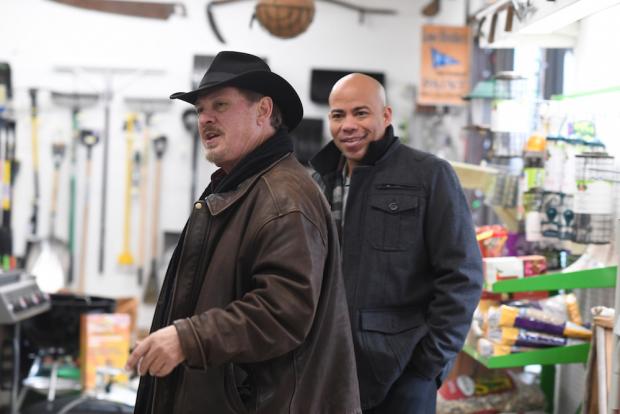 Director Fred Olen Ray and Gerald Webb on the set in Buffalo. Photo by Nancy J. Parisi.
by
Gregory Lamberson
/ Jan. 10, 2018 6am EST

Just over one month ago, state Senator Rob Ortt (Republican, 62nd District) from North Tonawanda introduced bill #S6968 to repeal the New York State Film Production Tax Credit, an incentives program which entices film and television producers to shoot their projects in the state. Senator Fred Akshar (Republican, 53rd District) co-sponsored the bill, which is now in “Rules Committee.” The program has been wildly successful: Empire Development Corporation, on behalf of the Governor’s Office for Motion Picture and Television Development, reported that $3.8 billion in associated revenue and 227,561 new hires were generated by the film industry in this state in 2017. Because the program enjoys bipartisan support, Ortt’s bill is unlikely to pass. But while local film crews, cast, and vendors wait for it to die in committee or suffer defeat on the Senate floor, its existence is already costing Western New York film production, jobs, and ancillary revenue.

Los Angeles-based actor, casting director, and producer Gerald Webb has had a hand in eight feature films produced here since 2013, and explains in an email interview how Ortt’s bill is already harming our local economy.

You came to Buffalo for the SyFy TV movie Battledogs, which was arguably the turning point for film production here. Since then, you’ve returned many times as a producer. What keeps bringing you and your partners back?

My business partner Christopher Ray initially landed Battledogs in Buffalo, while I was responsible for bringing star power in the form of Dennis Haysbert, Ernie Hudson, Bill Duke, Kate Vernon, Craig Sheffer, and the rest of the cast. I did so from back in Los Angeles. My physical introduction and love for the city of Buffalo didn’t start until a couple of years later, when I spent a few months on the ground producing the film Trial, a.k.a. A Mother’s Revenge, directed by Fred Olen Ray, that was purchased by Lifetime Movie Network. We’ve come back for eight films for a lot of reasons. Here are a few:

The Western New York region is beautiful. The historical buildings in downtown Buffalo, the natural power and beauty of Niagara Falls, the quaint small town feel of East Aurora, the ski slopes of Ellicottville, and the waterfront at Canalside are all dream locations for us to capture on film. The proximity of so many different types of landscapes, towns, buildings, etc. afford us a lot of flexibility as filmmakers to explore storylines and genres. It is rare to find such a wide array of location types all within a 50-mile radius.

The city, local budding film industry and residents of Western New York have wholeheartedly welcomed us time and time again. We’ve developed working relationships, friendships and an affinity for all of Western New York. The local crew and actors are excited about our projects and eager to learn and grow with us.

It’s still relatively affordable to film in Buffalo. Many people hear the term “movie business” and think we’re wasting millions of dollars, flying on private jets and eating caviar. The reality is every film we’ve done in Buffalo has had a budget of well under a million dollars, and, for the record, I generally fly economy plus and love the free biscotti cookies on American!

Tim Clark and Rich Wall of the Buffalo Niagara Film Commission work to help us find ways to maintain the quality of our productions while meeting the financial realities of independent filmmaking. I’d be remiss if I didn’t point out the state filming incentives have been critical part in that equation.

What types of spending do these films generate here?

We start with payroll wages for dozens of local film crew and actors. We bring some key crew members and star name actors to town which requires expenditures for flights, hotels, car rentals, fuel, meals at restaurants etc. We locally purchase supplies including building materials, clothing for wardrobe, office supplies, make-up etc. We pay daily fees to film at each of the locations we use in the project. In addition, many of these expenses also incur local and state taxes. It all adds up in good ways for the Buffalo and Western New York economy.

You produced two films here almost back-to-back in late 2017, and had planned to return for another one this winter. That film is now being shot in LA. How did concerns about the future of the New York State Film Production Tax Credit factor into that decision?

At the moment, the uncertainty of the future of the New York State film production tax credit is the determining factor on whether we will be able to continue to do business in the Western New York area. The film tax incentives give New York State a distinct competitive advantage in attracting film business over other states, including California. The potential loss of those incentives takes away that advantage and leaves New York as a diminished option for filmmakers.

Do you sense an unease among film financiers in general about New York State now, or do you view this an isolated loss?

This business is tough, especially for independent filmmakers. Our budgets are smaller, our profit margins are smaller and in most cases we don’t have any guarantee that our film will sell. For those reasons it is imperative that we are able to utilize tools like state tax incentives to produce and deliver our films. So no, it is not isolated. I know of several filmmakers and companies looking for other states to produce projects in as direct result of the uncertainty of the future of New York’s filming incentives.

What needs to happen for your team to feel comfortable enough to return?

First, I want to be clear that the Western New York region, the City of Buffalo, Mayor Byron Brown, the NFTA, Buffalo Police Department, Niagara Falls, the Buffalo Niagara Film Office, film commissioners Rich Wall and Tim Clark, the businesses and residents have always welcomed us, been helpful and made us feel comfortable with each film we’ve produced in the region. I am really thankful to Western New York for the hospitality and great partnership they’ve given us. It has been a mutually beneficial relationship, one I’d like to continue for a long time to come.

When we first came to Buffalo, there were almost no professionally trained film crew members. Our team took a group of dedicated and eager people and taught many of them the ropes of the film business. They’ve all continued to work hard, to grow, learn and hone their skills. Now, seven years later, I’m proud of so many of them that are highly skilled professionals, trade union members and good filmmakers. The idea of not being able to continue to give employment opportunities to good local film professionals like Kash Costner, Sam Qualiana, Nancy Parisi, and Megan Norris, to name a few, saddens our entire team. But we would really have no choice. The financial reality of making and selling films for independent producers makes utilization of state and local tax incentives an indispensable component of the equation. Without them, we will be forced to move our projects to other destinations. Without them, I also fear the local film crew professionals we’ve helped nurture will be left with far fewer opportunities.

The economics of low-budget filmmaking don’t work without cooperation and partnership with state and local governments. At one point California had 90-plus percent of the film business. As the economics of the film business shifted, California legislatures refused to adjust to the changing business landscape and ultimately lost a great deal of business and revenue to Louisiana, Georgia, Canada, and New York, which were forward thinking enough to realize tax incentives create a win-win situation for their states and filmmakers like myself. Sadly, just the talk of the New York film incentives possibly ending is already having adverse affects. Many companies have already moved films to other states. But I fear the real impact will be much greater and sustained over quite a while, should the state not definitively move to protect this budding local industry and the tax credits that made it possible.

I sincerely hope New York State legislators stay the course, keep jobs and commerce flowing to the state and specifically to the greater Buffalo area by committing to maintain their filming tax incentives for at least the next five years.

In the movie Field of Dreams, Ray Kinsella, played by Kevin Costner, kept hearing, “If you build it, they will come.” He built a baseball complex and the people came. New York’s legislature has built a budding industry and an economic boom for the state with its filming tax incentives. They built it and we filmmakers came to Western, NY. But now it seems everyone in the Western New York film industry is hearing, “If you tear it down, they will leave.” I just hope we don’t have to say goodbye.

Gregory Lamberson is a local author and filmmaker.