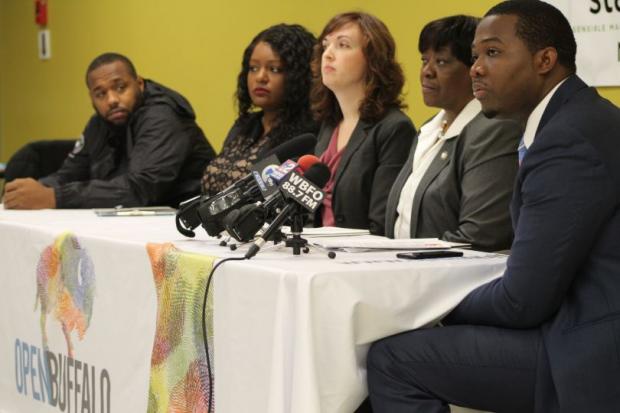 While it remains to be seen how the Department of Justice will proceed against marijuana, Sessions was met with immediate pushback from members of both sides of the political divide. For social liberals, marijuana laws are seen as an antiquated, prohibition-era measure that disproportionately affects minorities. For fiscal conservatives, it’s seen as an expensive and probably unnecessary enforcement process, involving police, courts, probation, and even prison costs.

In Buffalo, marijuana arrests have been the focus of activists for several years for their disproportionate impact on minorities. In recent years, people of color represent roughly 80 percent of arrests where marijuana is the primary charge. The city is about 50 percent white, and studies show that marijuana use is relatively even between races in America, if anything, whites use it more.

That was the case when we first looked at arrest data in 2015, and it’s still true now. While the total number of arrests were down in 2017—322 through the end of October, according to the state Division of Criminal Justice Services, down from 497 in 2015—the disparity is growing. Of the 322, only 46, or 14 percent, were white.

Last year, two incidents which resulted in unarmed young men of color killed during police confrontation involved suspected marijuana use as the original cause for a police stop.

Last February, officers Nicholas Parisi and Todd McAlister both wrote statements the night of Wardel Davis’ death, that Davis had admitted carrying weed, even though none was ever found on his person. Neither officer cooperated with the attorney general’s investigation into the incident, which yielded insufficient information to charge either officer.

Last May, officers Joseph Acquino and Justin Tedesco pulled over Jose Hernandez-Rossy after allegedly witnessing him smoking a blunt. Initial police accounts had referred to the stop, however, as a “routine traffic stop.” What happened next is still under investigation by the state attorney general, but an eyewitness that day claimed to have seen Tedesco take a knee and shoot at the fleeing Hernandez-Rossy, fatally killing him.

A coalition of local groups including the Partnership for Public Good and Open Buffalo continue the cause raised by Occupy Buffalo holdovers Anthony Baney and John Washington to make marijuana the “lowest police priority” for Buffalo. Buffalo Assemblymember Crystal Peoples-Stokes has been an early proponent for marijuana reform on the state level, co-sponsoring a bill in 2015 to regulate and legalize the plant in New York. Although Peoples-Stokes and Mayor Byron Brown have been close allies throughout their careers, the assemblymember has yet to gain her friend’s ear on the matter.