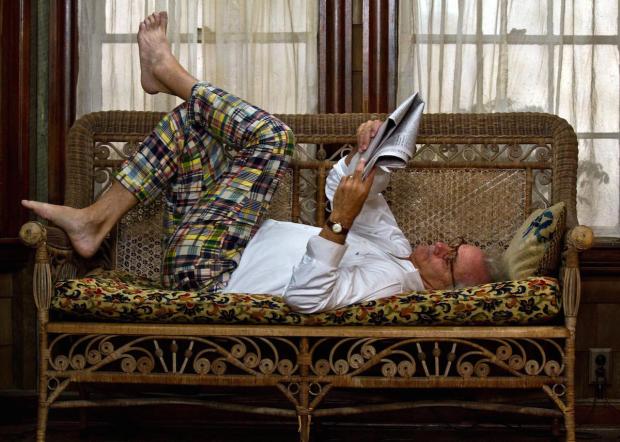 Bill Murray personifies the luxury of reading in Moonrise Kingdom.
by
Allen Farmelo
/ Jan. 31, 2018 9am EST

More than 15 years ago I heard these words for the first time: “Who has time to read?” It seemed everyone I knew was growing too busy to read, mostly working too much, but also weathering the invasion of work-related emails and cell phone calls into what used to be leisure time. There was also a lot more TV to watch, and I—who had quit TV for almost a decade already—can remember intelligent people telling me how TV had become quality art and that I no longer needed to fear somnambulant alpha states or Seinfeld’s cynical world-view. Relinquishing my iconoclasm to a degree, I enjoyed the hell out of The Sopranos and relentlessly rented DVDs. Then I caved and got a cell phone, then an iPhone, and then streaming video gave rise to binge-watching. I acquired a Facebook addiction under the auspices of feeling I needed to build social media presence, and before long my reading of books became an anomaly.

I was too inundated to notice how little I was reading. I loved Mary Gaitskill’s Veronica, but I never finished it. It took me two years to finish Franzen’s The Corrections. I tried reading over a dozen then-current authors, blamed their self-conscious post-modernism for my puttering out, then substituted classics and non-fiction and biographies as a solution, but put all those down largely unfinished, too. My bedside table was stacked with books, giving the illusion that I was, indeed, a Literary Man, but the truth is that I had become a poseur.

In 2012, Wes Anderson’s film Moonrise Kingdom made me see what a sad sack reader I had become. Set in the Summer of 1965, Anderson  confronts us with Bill Murray’s character supine and reading. All this guy does is read and nap, and I recognized that guy. That was me as a pubescent nerd clambering through The Call of The Wild, The Chronicles of Narnia, and spicy Judy Bloom titles—all summer reading assignments. That was me as a punk teenager sympathizing with the angry male characters of Céline and Bukowski. That was me in college reading the ubiquitous pink Zen and the Art of Motorcycle Maintenance on a Lake Erie beach; and it was me during my first summer off from graduate school, reading everything Hemingway wrote in one stretch after a professor told me my writing had become “a morass of academic schlock” and that I had best “read Hemingway until you are cured, kid.” Seeing Bill Murray as the supine reader sounded a timely alarm, waking me to the fact that those half-read books on my bedside table were the neglected accoutrements of an avid reading habit I’d unwittingly abandoned. I was shocked.

For simplicity’s sake, I’ll say that the mid-1990s marks the point at which reading began to change from something you just did to an indulgence. I was a middle school English teacher for a minute in the late 1990s, and I remember well the resistance from my colleagues and parents when I’d bring my students to the library once a week for free reading. Kids loved it, and I thought it a triumph that they were so hungry to read, but other adults thought it a slothful pursuit. Perhaps reading appeared anachronistic as the dial-up internet farted greater promise for those future Millennials; perhaps it was that I appeared to be doing nothing as I read along with the kids; I don’t know. I thought it a rather clever way to squeeze something positive out of Friday afternoons when teaching pre-adolescents was akin to gathering crickets with tweezers, but the reigning attitude toward just-laying-around-reading-a-book was shifting from reverence to suspicion.

My grandfather, an immigrant laborer, couldn’t read, and my parents, like so many depression-era folks, saw reading, writing, and education as a means to class ascendence. Following an impulse similar to those late-90s parents who so valued internet time, my parents made reading a childhood duty. Once their five kids had all proven successful enough, my parents seemed to embrace bookishness for its own sake. The last of five kids by seven years, I caught their attitude shift while an adolescent, and I can still see both of my parents reading, heads tilted back to accommodate bifocals, absolutely silent until turing a page. My mother always licked her right pointer-finger and pushed the page from the top corner, while my father licked his left thumb and pulled from the bottom, both of their gazes leaping unbroken to the top of the next page. In no other setting were my parents as elegant and poised as when they read books.

Were my parents being indulgent as they read for pleasure? Had reading gone from mandate to luxury? It looks like a luxury from 40 years of distance, but they were also just doing what people did back then, as Wes Anderson so brilliantly portrayed. By contrast, what are we to make of today’s so-called digital natives’ reading habits? Those kiddos will likely never learn handwriting and, it seems, they tend to give up physical books once their parents stop reading them bedtime stories. I don’t signal digital natives with any great concern; rather, I mention them because I wonder if anything other than a physical book can detach us long enough from digitized stuff to afford us the chance to just-lay-around-reading-a-book Bill Murray-style—and by Bill Murray-style, I mean entirely undisturbed for hours on end.

Perhaps this is the central deterrent to reading for today’s parents: Bill Murray’s absorption into his paperbacks creates an adult-free outside world in which his kid gets into all kinds of trouble and winds up missing. Left to my own devices as a kid, I literally set fires, blew things up, got into fights, and regularly risked my life on land, sea and air sans helmet as my parents languorously turned pages with moistened fingers. “Go outside and play” must sound like an irresponsible indulgence today, and certainly the attentiveness demanded by today’s parenting codes—compounded by tectonic shifts in work and family life—have helped transform just-reading-a-book from an unremarkable way to pass time to a capital-L Luxury.

I recently read that, on average, CEOs read 60 books a year. That got me thinking about my own reading habits. Is that just how the leisure class lives? Cynically, I imagine that CEOs can read that much because they’ve got nannies and maids and drivers and assistants and secretaries. Sixty books per year is a lot these days. I almost don’t believe it, but I envy it nonetheless.

After binge-watching The Crown or whatever, my partner and I try to take week-long breaks and just read instead; charmingly, she calls it Analog Time. When I consider all the luxuries to which I (admittedly and obviously) aspire, reading is about as cheap and accessible as it gets. The buzz is delightful, the mind all lit up with images and plots and dialogue from the world’s best authors, knowledge and vocabulary expanding as we bask in rare silence and, rarer yet, unadulterated alone time. Given how damn nuts our lives can be today, perhaps reading has become the ultimate luxury.