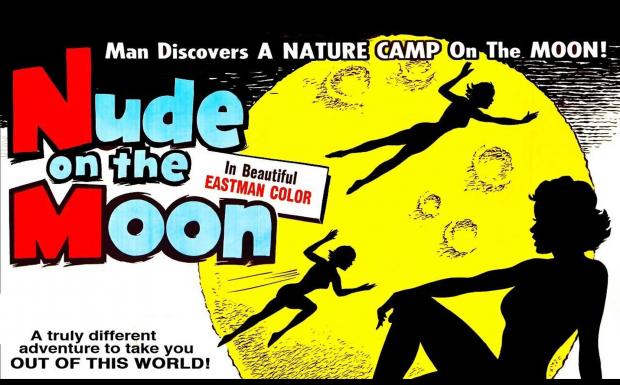 [SCREENING] It’s not often that you get to see a Doris Wishman film on the big screen, or for that matter in public. Those of you who have encountered her work—Deadly Weapons, Bad Girls Go to Hell, and Let Me Die a Woman might be the best-known titles—might not feel that this is a bad thing, but you have to give her this: After seeing a few of her movies, you’ll never look at conventional cinema in quite the same way. Whether or not she intended to, Wishman subverted the dominant paradigm like nobody’s business.

As part of its “Otherworlds” series of alternative science fiction film, Squeaky Wheel will screen Wishman’s 1961 Nude on the Moon next Wednesday at 7 pm. Here’s a survey of the woman and her work I wrote on the occasion of her death in 2002:

Like Billy Wilder, filmmaker Doris Wishman died this year, on August 10, at the age of 90. Like Wilder, Wishman’s name begins with the letters W and I. And that’s just about all that the two have in common, other than the fact that both made films that I find endlessly fascinating—albeit in rather different ways.

Now that even the most no-budget indie movies are being made by people with film school degrees using sophisticated but inexpensive equipment, we’re not likely to see her like again. A tiny, reasonably respectable Jewish lady from Manhattan, Wishman was one of the few women to earn a place in the pantheon of bad auteurs. Like those of Ed Wood, her movies were so consistently and astonishingly inept that they’re mesmerizing. They refute everything we know about film grammar and storytelling, but with an innocence that makes them as endearing as they are laughable.

Wishman made films from 1959 until 1980, and they actually got worse as she went along: the last. A Night to Dismember, is so jaw-droppingly awful that I’m amazed she ever even let anyone see it. Thank god she did, though—I never get tired of watching it.

A frustrated actress who always maintained that she was a better thespian than her drama school classmate Shelly Winters (as she told Joe Bob Briggs, “I used to be so mad because I knew that she was just sleeping her way to the top, but if I had it to do over again, I’d do the same thing, I’d sleep with everything that moved”), Wishman was working in film distribution when she got married and moved to Florida in the late 1950s.

At the time, an innocuous little movie called Garden of Eden was being considered by the Supreme Court. It had been condemned as “obscene” because it contained scenes of people at a nudist camp, sorting the traditional nudist habiliment. The Court ruled that the mere display of the naked human body was not in and of itself obscene. Of course, this led to the immediate production of movies shot in nudist camps by every filmmaker who recognized a ticket to box office gold when they saw one.

After her first husband died of a heart attack, the middle-aged Wishman, realizing that any idiot with a camera and access to a Florida “sunshine farm” could cash in, decided to join their ranks. Titles like Hideout in the Sun, Diary of a Nudist, Gentlemen Prefer Nature Girls, and The Prince and the Nature Girl indicate everything these is to be said about these movies: they had sharp color photography, naked women, and just enough plot to avoid accusations of pandering. Stuck for things to have her cast do while they were being naked, Wishman filmed naked volleyball matches, naked chess games, and even a naked archery tournament.

The first inkling of Wishman’s penchant for gimmicks came with her 1961 film Nude on the Moon, in which a pair of scientists build a rocketship in their Florida backyard and fly it to the moon, where they discover … a lunar nudist colony! Actually, the locals are wearing earth-tone shorts, so they don’t exactly qualify as “nude,” but it was pretty hot stuff for the time anyway. And if “the moon” looks familiar, you’ve probably seen Wild Women of Wongo, which was filmed in the same Coral Gable, Florida campground.

It’s hard to believe that it took a couple of hundred nudist camp movies before the novelty wore off, but when it finally did, Wishman and her fellow purveyors of prurient pulchritude developed what came to be known as “roughies.” Once again, the titles say it all: The Sex Perils of Paulette, Love Toy, Too Much Too Often, Another Day Another Man, and the ever-popular Bad Girls Go To Hell. Filmed in Manhattan, these noirish black-and-white melodramas were as downbeat and sleazy as the nudies were moronically cheerful.

My favorite from this period is Indecent Desires, a sort of mix of Little Shop of Horrors and Repulsion in which an Eddie Deezen clone obtains a doll that gives him power over his neighbor, a secretary whom he lusts after. To keep her target audience happy, Wishman throws some nude ballet exercises into the mise en scene.

It was around this time that Wishman developed the other stylistic tropes that distinguished her oeuvre. (She considered all such talk lunacy, incidentally.) Because most of her late-sixties efforts were filmed not in verdant, sunshiny Florida parks but in what appears to be the same cramped Manhattan apartment, Doris compensated for the lack of visual interest by letting her camera meander every which way. She also began to favor absurdly arbitrary editing, randomly cutting away from her cast to examine at some wholly meaningless piece of furniture or bric a brac. (When Robert Bresson fans are bad, they’re sent to hell to watch Doris Wishman movies for all eternity.)

On top of that, Wishman found a way to deal with the problem of post dubbing, which she relied on because she couldn’t afford live sound. (She did most of the voices herself, often re-writing the story as she did so.) She decided she could avoid the difficulty of matching words to the lip movements of the actors by simply not showing any moving lips. In a Doris Wishman movie, when you have a standard conversation in which the camera cuts back and forth between two people, she’ll generally focus on the face of the listener rather than the speaker. It seems never to have occurred to her that the blank face of a bad actor who has been told to mime “listening” is infinitely odder than someone whose lip movements don’t quite match the soundtrack. (Godzilla films paved the way for us in that arena.) Of course, to minimize this Wishman often interrupts the conversation with shots of the back of a character’s head. Or their feet. Or their alarm clock. Or whatever else was in the room that she hadn’t previously photographed.

As the amount of prurient content expected by grindhouse audiences increased, Wishman really went off the deep end. In 1970 she made The Amazing Transplant, in which a man forces a doctor to transplant the penis of his dead friend on to his body. This of course turns him into a homicidal maniac. After Keyholes are For Peeping (1972), an ill-advised attempt at comedy starring Sammy Petrillo, the one-time star of Bela Lugosi Meets a Brooklyn Gorilla (who was sued by Jerry Lewis for imitating his act), Wishman hit her stride with the films for which she will always be remembered, Deadly Weapons (1973) and Double Agent 73 (1974).

Both starred Chesty Morgan, whose 73” bust line allowed her to make a living as a stripper despite the fact that—I’m sorry, there’s just no charitable way to say this—she was not a woman you would ever want to see naked. This of course made her the perfect star for a Wishman movie. There’s nothing remotely sexy about either movie, both of which have Morgan killing evildoers by smothering them between her massive, um, talents. Such is the nature of exploitation that, despite everything I’ve just said, some of you out there are thinking to yourselves, “Wow, I’d like to see that!” Well, don’t say I didn’t warn you. I’ve always felt that the National Organization for Women could show both films at fundraisers as a parody of American breast obsession, in the same way that NORML used to show Reefer Madness.

But worst of all was her last film, the previously mentioned **Night to Dismember. Her attempt to enter the then-hot slasher market, shot in 1979, it features gore effects that your nephew could do better with some kitchen implements and a jar of ketchup. Under the best of circumstances, this would have been a turkey. But the lab that processed it accidentally (?) destroyed much of the footage, forcing Wishman to salvage what was left by inserting some leftover sex scenes and a lot of inane voice over narration. I’ve seen it at least a half dozen times and it makes absolutely no sense whatsoever.