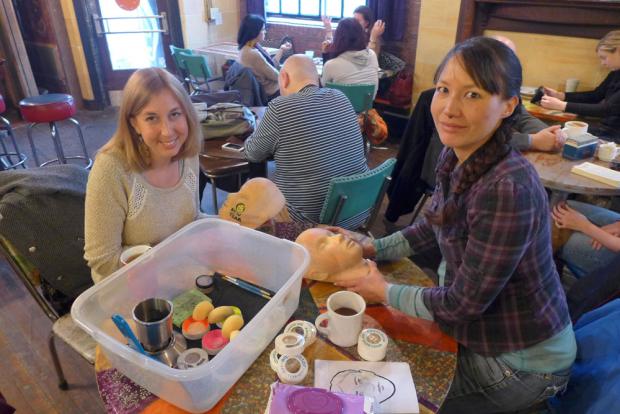 As the air hums with post-holidays and year-opening energies—an intermingling of anticipation and angst—most are getting back into solid work grooves, recovering from travel/visits, and perhaps planning big for the brand new year. Heading out on a late December afternoon, The Public sought out three Buffalo stories of those working in public places.

Spotted reading in the lovely brick and hardwood side room of the downtown Perk’s on Broadway was Jordan Smith, holding a magazine on his lap and a cell phone to his ear. He was on hold with his doctor, he said, and had been for more than 20 minutes. As we began our interview, he abandoned all hope and ended the call.

“I’m a technical librarian at the library [the Central Library just across the way from Perk’s]. I teach classes and make promotional videos,” he said. He also described himself as a film critic, writing reviews for ioncinema.com. He was on his lunch break and was “catching up on movie news.” He orders the same lunch every day: a pulled pork sandwich and iced coffee. He was reading Film Comment and said the last great movie that he saw was The Imitation Game.

Jordan said that he will not be attending Sundance this year, as he’s done in the past. “I’m getting married in March and we’re going to Europe for our honeymoon, so I’m using my time to do that instead.” He’s having a suit made at Bureau on Elmwood for his wedding and is also quite excited about that.

Cross-town, at work at one of the computers at vibrant and sun-drenched Merriweather Library on Jefferson Avenue on the East Side, was Timothy Perkins (left), who lives on nearby Northland Avenue. “I’m online looking at Facebook, and browsing news about what’s happening in the hip-hop and R&B worlds,” he said.

“I write music, and tell stories when I do. I went to South Park High School and English was my favorite class—and gym. I played drums and did sports at school.

“Bless is the name I go by when I make music, it’s my stage persona. I use Bless because though I’ve gone through struggles my whole life I feel blessed. I’m blessed with talent, with the family that I have, and the friends that I have. Even though there are hard times I’m glad to be here. I work at this library once a week, there’s a wide variety of computers, a lot of music, books, movies—and it’s huge. And it’s quiet. A lot of libraries aren’t, you know. It’s peaceful.”

On Grant Street, hard at work in Sweet_ness 7, preparing for a gig on New Year’s Eve, were Sarah Sonnenberg and Amy Hagemeier (pictured above). The two, adding decorative flourishes to two plastic demi-heads, are part of a troupe of five face-painters who worked First Night Buffalo at Buffalo Niagara Convention Center, the family-friendly New Year’s Eve event with its own countdown and balloon drop.

“Right now we’re training for face painting at First Night. I have to contract other artists so I want to be sure that they know the supplies, they know what to expect,” Sonnenberg said. “I have these quick design sketches for them to follow, they can all be done in one minute and the paint will react to black light. We’ll be next to a black-light techno bubble dance party.

“Last year the line was non-stop for four or five hours. It was fun, all the kids were happy, I was happy.”

And what do they anticipate will be the most popular design? “One with stars and ‘2015’ on it will probably be,” Sonnenberg said. “And this pretty, swirly design,” added Hagemeier.