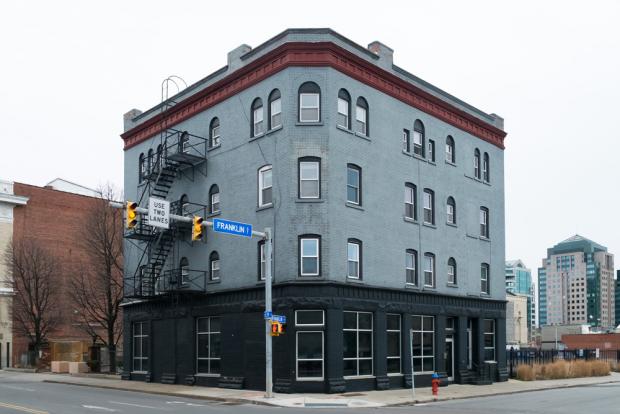 The Bachelor apartment building at Franklin and Tupper.
by
The Public Staff
/ Jan. 6, 2016 2am EST

Buffalo’s preservation board seeks to landmark two properties:  This Thursday, January 7, the City of Buffalo’s preservation board will start the process to designate as landmarks two properties whose owners are seeking demolition permits. The first is an apartment building at 329 Franklin Street, at the corner of Tupper, which Ellicott Development wants to tear down in service of a $75 million, 12-story, multi-use development anchored by a hotel and market-rate apartments. To learn more about that apartment building, called the Bachelor, turn the page and have a look at this week’s “Looking Backward,” and read more about its history in our Looking Backward post.

The other property is the Crosby Company’s complex at the corner of William and Pratt Streets. In November, the company applied for a demolition permit for five structures in the complex, “due to deterioration and collapse of structural walls and roofs.” On December 17, the Buffalo Preservation Board denied the company’s request for approval and agreed to seek landmark status for the complex.

Nonetheless, on December 22, workers from Empire Dismantlement began to remove the roof of a building on the north end of the complex on Pratt Street, between William and Broadway. (Empire Dismantlement had had heavy equipment staged at the north end of the complex for several weeks prior.) A source in the city’s Department of Permits & Inspections could not locate a permit for that work and did not believe one had been issued. Last week, workers began tearing up part of Pratt Street, apparently to cut off water to the building.

The Crosby Company and its facilities are certainly historic: Founded in 1896 by William H. Crosby and William H. Hill, the Crosby Company initially manufactured bicycle frames and parts, and later parts for automobiles. (An advertisement for the country’s first automobile show, in Chicago in 1901, declared, “Crosby metal stampings are playing an important part in the development of the automobile.”) Over the decades the clientele for its metal-stamping operations continued to diversify; in 1947 the company had 450 employees and produced, for example, 500,000 bathroom scales per year. The company continues operations, mostly using the buildings at the toward the William Street end of the complex.

The founder’s name is memorialized on the side of the William Street building, but also in Crosby Hall (dedicated in 1932) at the South Campus of UB, where he was a trustee and to which he was a significant donor, and in the Crosby Building (built in 1916, currently owned by Ellicott Development) at the corner of Franklin and Mohawk downtown, just three blocks from the Bachelor and Ellicott Development’s proposed new 12-story building.
—GEOFF KELLY

Steve Pigeon’s new tax liens:    Who knows whether 2016 will see any closure to the state and federal investigation into political operatives Steve Pigeon, Steve Casey, and Chris Grant, which became very public when their houses were raided on May 28. What we do know is that Pigeon continues to accumulate liens.

On December 8, the IRS filed a federal tax lien of over $65,800. On December 22, the Admiral’s Walk condominium association filed a lien against Pigeon for $4,500 in unpaid condominium fees.

Pigeon has previously been caught in apparent arrears on his condominium fees and/or assessments, as he and tanning mogul Dan Humiston seemed to swap ownership and/or possession of two separate units at Admiral’s Walk.

Dedicated readers will recall that in February 2015, Pigeon used the Buffalo News’s Bob McCarthy for propaganda purposes, asserting that he had more than enough liquid funds to play his typical games. He showed up with what he said were tax forms that purported to show that he had enough income to shell out six figures to obscure, small-potatoes political committees.

Pigeon opened his tax returns from the past several years to inspection at the News’s request in an effort to quell speculation that his contributions to the WNY Progressive Caucus in 2013 stemmed from anywhere but his own bank account. His records over the past three years indicate a mid-six-figure income, which he says proves his ability to spare $100,000 even for a fund supporting relatively low-level candidates.

He can afford big donations to a political cause the same way others could contribute to a church, he said, especially because he has no wife or children to support, takes few vacations, has no real hobbies, and lives a non-extravagant lifestyle.

These new liens are post-raid—the condo fees go back as far as June 2015—and underscore the difficulty in which Mr. Pigeon finds himself. One may also extrapolate from the IRS lien that Mr. Pigeon’s 2014 gross income was high enough to result in a $65,000 tax liability. —ALAN BEDENKO

Medical marijuana still weeks away for Western New Yorkers:   On Monday, the eve of the earliest possible start of New York’s long-anticipated and widely panned medical marijuana program, a state Department of Health spokesperson finally broke silence to announce that the state will be up and running on Thursday, January 7.

If you or a loved one has been watching this play out with baited breath, wondering when you’d legally be allowed to use a potentially life-altering drug to treat a severe ailment, our advice is keep breathing. The state’s deliberate and conservative program is a slow train coming, but it’s coming.

While the New York Daily News reports that at least one dispensary—Columbia Care’s Union Square depot—is set to open on Thursday, the two Buffalo-area locations seem at least a few weeks off. Although they started recruiting sales and security staff online early last month, there’s not even a sign outside 25 Northpointe Parkway in Amherst for Pharmacann’s proposed dispensary. Bloomfield has at least put its brand out at the busy intersection its dispensary will call home at Main and Union in Williamsville. Neither company has responded to attempts to contact them.

UPDATE: Bloomfield announced late Tuesday they would be opening their dispensary in Williamsville on Thursday, January 7, and other outlets have reported that Pharmacann will open Thursday as well.

The Buffalo Cannabis Movement issued a statement over the weekend, expressing frustration with the state’s progress and its restrictive applicative powers and haphazard sense of geography. (For example, we noticed in October that three dispensaries will be located within a four-mile radius in the Syracuse area.) Knowing that it could take several years for the drug to reach those in need of it throughout New York State, the group called on lawmakers to support the Crystal Peoples-Stokes-sponsored “full legalization” bill in the state legislature, the Marijuana Regulation and Taxation Act (MRTA).

“We urge all local government officials to pressure our state representatives to focus on this issue, as it is not only a civil rights issue, but a human rights issue,” the group concluded.
—AARON LOWINGER