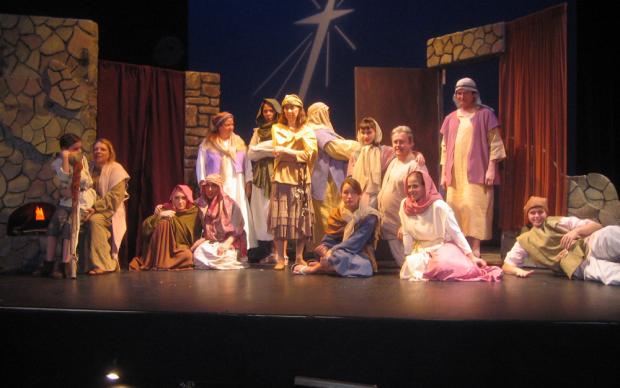 Gian Carlo Menotti had two inspirations for and one challenge to fulfill when he approached writing his opera Amahl and the Night Visitors, the sixth annual presentation of which by Nickel City Opera is this weekend, January 8-10, at Westminster Presbyterian Church, 724 Delaware Avenue. Performances are Friday at 8pm, and Saturday and Sunday afternoons at 3pm. Tickets are $16 for adults, $8 for children and will be available at the door or in advance at Eventbrite.com. (Type “Amahl” in the search field.) For more information call 716-939-3722.

One source for Menotti is the roughly 500-year-old painting The Adoration of the Magi by the Dutch artist Hieronymus Bosch (1450-1516). In it we see the three foreigners from the East, one bowing, presenting their gifts to Mary with the infant Jesus on her lap. The Magi were literally (in Greek) astronomers, whose interest in following the star to Bethlehem was at least partly scientific. They are variously depicted in Matthew’s telling of the Nativity as wise men or, depending upon the translation, kings. Moreover, they appear aware that whomever it is they expect to find is the King of the Jews. (They make the mistake of telling this to Herod, the reigning king installed by the Romans. Not long after, Herod orders the killing of all male children younger than two years. This forces Mary, Joseph, and the child to make a quick escape to Egypt.)

Bosch’s painting is rich in symbolic imagery. The beasts whose breath warmed the infant are in a stall to the left. A dove sits in a window further up, and angels spread a tarp across the stable walls, shielding the mother and child. A few faces can be seen on the left and right gazing through the windows; perhaps some of the shepherds who chose to stay on. But if we look beyond the scene of adoration, into the middle distance hundreds of yards away, just above and a little to the left of Mary’s head, we see two figures: a woman in a red robe and white veil, and before her a man or boy, dancing. On the ground lies a crutch. It is very likely that they provided Menotti with the characters of Amahl, lame boy, and his weary mother who are central to the story of the opera.

Menotti’s other inspiration was Christmas as celebrated during his childhood in Italy. It is the Three Kings, rather than Santa Claus, who bring the gifts. He recalls how he and his brother would try as hard as they could to stay awake to catch a glimpse of them. Sleep invariably would overtake them. “But I do remember hearing them,” said Menotti. “I remember the weird cadence of their song in the dark distance; I remember the brittle sound of the camels’ hooves crushing the frozen snow; and I remember the mysterious tinkling of their silver bridles.

“My favorite king was King Melchior, because he was the oldest and had a long white beard. My brother’s favorite was King Kaspar. He insisted that this king was a little crazy and quite deaf….He was also rather puzzled by the fact that King Kaspar carried the myrrh, which appeared to him as a rather eccentric gift.”

The challenge came when the National Broadcasting Company (NBC) commissioned Menotti to write an opera for television to be broadcast live on Christmas. He admits that for the longest time he didn’t have a single idea. Then, one gloomy November afternoon, while walking through the Metropolitan Museum of Art he came upon Bosch’s Adoration of the Magi. Seeing it brought everything back: Christmas in Italy with his brother, their anticipation of the arrival of the Three Kings with their different personalities, and their weird song echoing from the distant hills.

January 6 is the traditional date for the Feast of the Epiphany (Manifestation in Greek), the day the Three Wise Men (or Kings) had revealed to them God the Son as a human in Jesus. While the Gospel of Matthew renders magi as “wise men,” its Greek root is more at “magician.” So we may conclude that the “magic” of Christmas—the wonder, the glad tidings, the revelation of the anointed one—includes the marvelous and transformative things that Amahl, his mother, and the world experience the night the three visitors came.