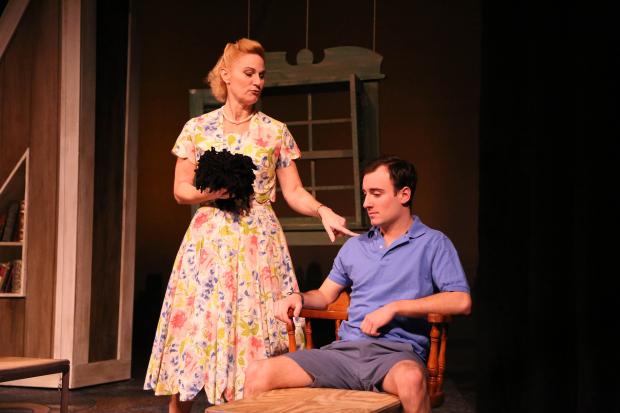 One of Buffalo’s most admired and enduring leading ladies, Lisa Ludwig is currently appearing as Claire, the restless wife in A. R. Gurney’s Family Furniture, at the Kavinoky Theatre. As known for her personal sense of style as she is for her imposing stage presence and professionalism as an actor, Ludwig has played a wide range of roles—dramatic, comic, musical, classical—at the full range of Buffalo theaters, from the Kavinoky to the Robeson to BUA to MusicalFare to Jewish Rep.

She’s done Shakespeare (and is the managing director of Shakespeare in Delaware Park); she’s done musicals from Sondheim to Sinatra; she’s done dinner theater. When she appeared in the courtroom drama, Nuts, at Desiderio’s Dinner Theatre this season, she rated her name above the title in a sign board along Broadway in Lancaster. She is also a noted director of high school shows.

The Lisa Ludwig signature is focus and specificity, often playing characters with unexpectedly acerbic wit. In Family Furniture, she returns to the close-knit and well-bred world of post-war Buffalo. As the play begins, her character has taken a trip to New York City, ostensibly to buy slip covers; it is 11 o’clock and she has not returned to her hotel room. In Gurney’s world, such a departure from the daily norm has ominous implications. Claire is a woman with a calm and perfectly composed exterior, whose placid smile obscures a hidden discontent; it is a definitive Lisa Ludwig role.

What quality in the character you are currently playing is most unlike your own personality?
She tends to hide her feelings. I’m not very good at that. Also, she’s a stay-at-home 1950s house wife/ mom. I can’t imagine staying at home and baking cookies—although, given the opportunity, I might like to try that.

What quality in your current role is most like your own personality?
She loves her children and makes an effort to dress well.

When and where were you the happiest?
I am generally the happiest when I am with my family and friends…and I am always happy when at Disney world. So if my family, friends, and I could all be at Disney World together at one time I would be in heaven!

What is your idea of hell on earth?
When people I love are in pain and there is nothing I can do about it

What is your greatest fear?
Suffocation.

Which talent do you most wish you had?
The ability to dance.

What superpower do you most wish you had?
Mind control.

What would you change about your appearance?
Too many things to pick just one.

What trait do you most dislike in others?
Narcissism.

What quality do you most value in a good director?
Being prepared.

What is your guilty pleasure?
Tabloid magazines and Paula’s doughnuts. (Chocolate-covered angel cream!)

Who is your favorite fictional hero?
The evil queen from Disney’s Snow White.

Who are your real-life heroes?
My parents.

What do you consider to be the most overrated virtue?
To be casually forgiving. I do not think forgiveness should be asked for or given lightly; I think it needs to be truly earned.

On what occasion do you lie?
If I tell you that, I’d have to kill you!

What was the subject of your last Google search?
Dogs/Puppies.

If you come back in another life, what person or thing would you like to be?
A wiser version of myself.

What is your motto?
“Life isn’t fair. It’s just better then death, that’s all.” (From The Princess Bride.)