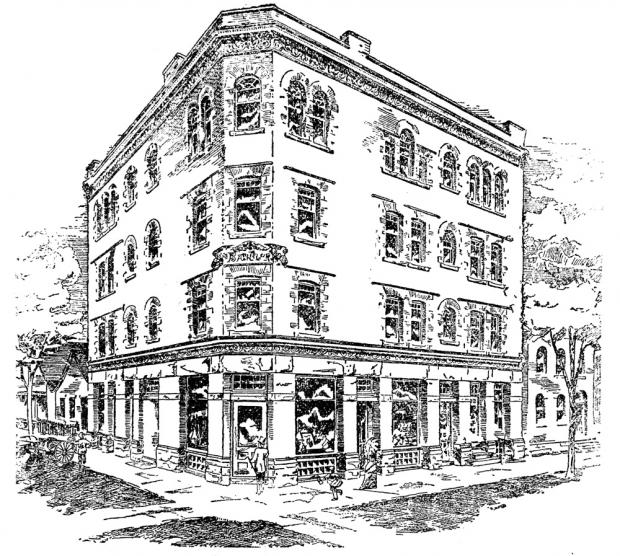 Unless plans are averted, Carl Paladino’s proposal to construct a parking ramp and hotel, offices, and apartments at Franklin and West Tupper streets will come with a heavy price. Ellicott Development has submitted plans to the city to raze the Bachelor, 329 Franklin Street, a little-known but historically important apartment house built in 1886.

The Bachelor was a pioneer. It was the first gentlemen’s apartment house built in Buffalo. When it opened in 1886, it was marketed only to bachelors under the motto, “When a man’s single he lives at his ease.”

A list of former residents of the Bachelor includes James Parker Hall, the first permanent dean of the University of Chicago Law School; William Bennet Colburn, secretary and treasurer of the Pierce Cycle Co.; and Henry Hale Seymour, an attorney who argued at least one case before the US Supreme Court and authored a book titled Ceramic Art in Egypt. Claude Bragdon, an architect who designed Rochester’s New York Central Railroad station and First Universalist Church, among others, described his experience living at the Bachelor while in the employ of Green & Wicks in the early 1890s:

I took two rooms and a bath in a newly built apartment house exclusively for bachelors on the corner of Franklin and Tupper streets; my breakfasts were served to me by a gentleman’s gentleman; I dined in a solitary state at the Hotel Iroquois; and I spent the evenings drawing or reading in my room or browsing the books of the Buffalo Library.

Ellicott Development plans to incorporate the historic Forbes Theatre into the mixed-use project—a credit to Paladino and his firm, which has done multiple historic rehabilitation projects in recent years. Ellicott Development has a contract to purchase the Bachelor for an undisclosed price from Nick Sinatra’s BN Medical Campus Rental Group LLC, which acquired the building in 2014 for $945,000.

The proposal to demolish the Bachelor would be callous had its history been widely known, but it hasn’t been—until recently. A December 18 Buffalo News article claimed the building was only 90 years old.

Will we do the smart thing, and incorporate this historic structure into future plans? Time will tell, and likely soon. The city’s preservation board takes up the demolition request at its Thursday meeting.

For now, read the below 1886 Buffalo Morning Express article detailing the construction of the Bachelor. Check out this week’s “Looking Backward,” in print or online, which takes us to Franklin and West Tupper streets in 1948.

Let’s save the Bachelor.

An Apartment House for Gentlemen—A Novel Idea for Buffalo.

“The Bachelor,” located at the south-east corner of Franklin and Tupper streets, and owned by the Metcalfe estate, is a four-story structure,  designed by Green & Wicks, architects, and intended to be occupied as an apartment house for gentlemen. It is built of pressed brick and Medina stone.

The ground floor is laid out into a suite of dental parlors, a doctor’s office, and a small store.

The entrance to the apartments proper is from Franklin Street. The main hall lighted by skylight, is in the center of the building, and is occupied by a staircase and elevator.

Each apartment consists of a study, a bathroom, one or two sleeping rooms, together with closets, mantels, and fire places. Steam heat, gas, and hot and cold water are supplied to each apartment, and fire-escapes are placed on three sides of the building.

Designed especially for this purpose, “The Bachelor” will provide for single gentlemen the maximum of comfort at the minimum of cost. The building will be under the charge of a resident janitor, who will care for the apartments.

The building will be finished interiorly with oak and Georgia pine, and the plumbing and ventilation are arranged on the most approved principles of modern sanitation. The furnishing of the several apartments is left to the taste of their respective tenants.

“The Bachelor” supplies a want which daily makes itself more strongly felt in this growing city. Now the bachelor in whose honor the building is named may escape the cribbed confinement incidental to a hall bedroom in a crowded boarding-house and find himself with room to swing a cat or a buttonless shirt, and if his struggles with a stubborn necktie bring on an indulgence in expletive, he may so indulge without fear that sensitive female ears may be shocked thereby. He may leave his bottle of hair-dye—or bottle of anything else for that matter—standing in bold prominence on his bureau without the fear of its exciting a scandal. His apartment will be his castle; and if his cigars diminish in number with undue rapidity it will be from his own smoking, and not from the depredations of the family cat or the chambermaid’s cousin. Bachelorhood is a sad condition, but under these new surroundings it will be robbed of half its terrors.

The building will be ready for occupancy about the 1st of May.