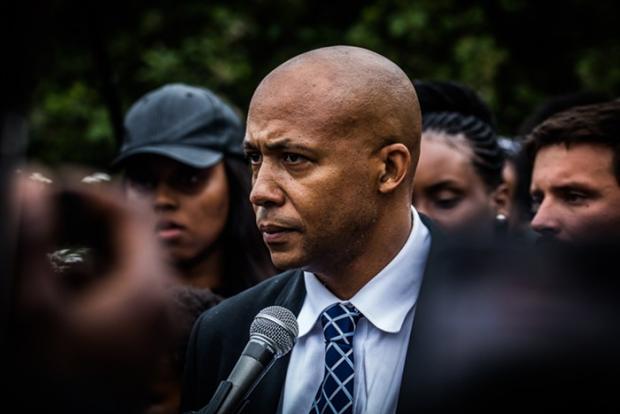 James Bible at 2017 rally after Seattle Police fatally shot Charleena Myles. Photo by Nate Gowdy, published by The Stranger.
by
Aaron Lowinger
/ Jan. 4, 2019 12pm EST
James Bible is a civil rights attorney based in Seattle, Washington and a former president of the Seattle King County NAACP. As such, Bible has had a front seat view of that city’s challenges with police accountability and its path to a 2012 consent decree from the Department of Justice mandating use-of-force reforms.
And Bible, as chance would have it, is also the uncle by marriage of Marcus Neal, the man shot and killed by Buffalo Police after an alleged and bizarre shoplifting incident.
Neal became the fifth person to die by the hands, vehicle, or gun of Buffalo police since February 2017, joining Wardel Davis, Jose Hernandez-Rossy, Susan LoTempio, and Rafael Rivera. Police involved in the four deaths prior to Neal’s have all been cleared after investigations by the state attorney general and, in Rivera’s case, Erie County District Attorney John Flynn.
To this point, the official police narrative has been that Neal was suspected of shoplifting from the Amherst Street Wegmans store and was pursued through Black Rock neighborhoods for over a mile until he climbed up on a flat-roof garage behind a house on Gladstone. The Buffalo News reported that police radio transmissions indicated that Neal had begun cutting himself with a knife. According to police accounts, Neal was confronted on the garage and pepper-sprayed. He then “charged” at officers, forcing rookie officer Joseph Meli to fire three shots. Neal died the next day at Erie County Medical Center.
We’ve spoken with Bible twice over the holidays about his take on the case, about the impact this incident has had on his family, about Buffalo’s police accountability crisis, and the relationship between law enforcement and minority communities across the nation.
Bible informed us that the family has retained the services of Manhattan civil rights firm Neufeld Schek & Brustin to investigate the circumstances surrounding Neal’s death. That firm’s partners Peter Neufeld and Barry Scheck direct the Innocence Project, an initiative founded by Scheck and Neufeld in 1992 that has exonerated more than 300 people, mainly using DNA evidence. Phone messages left at the Manhattan office and the Rochester office of associated counsel Don Thompson, whom Bible indicated had taken on the case, were not returned.
The family has serious questions about the official narrative offered thus far by the police department, and they’ve been stymied in their efforts to gain critical information: The Buffalo Police Department has deflected requests for any videos, documents, or other evidence while it conducts its own investigation. “Ultimately, an investigation that’s done exclusively by the municipality does not have the air of legitimacy,” said Bible, who hopes that a private investigation will uncover the truth of what happened.
Neal’s death will not be investigated by the state attorney general’s office because police claim Neal was armed with a knife. The executive order that triggers an AG investigation in the event of a fatality during an encounter with police is specific to unarmed individuals who die by police hands.
Bible has been dismayed by the fact that no information about this knife has been released. “If he had a knife, they should have shown it,” he said. “They should’ve taken a picture of it. They should have released it to the community. Nobody knows whether this was a butter knife, a pocket knife that wasn’t open, or no knife at all. Frankly, people I’ve talked to about him don’t know him to carry a knife. They just don’t. It doesn’t mean that he wasn’t, but they don’t know him to. That didn’t make sense to anybody. Because the inconsistencies that have come out from other cases with Buffalo police,” Bible said, referencing the Jose Hernandez-Rossy and Rafael Rivera incidents, “there’s absolutely no reason to believe the Buffalo Police Department when it comes to police shooting. None.”
Bible openly doubts whether his nephew was even the same suspect identified in the initial service call. “Until there’s an adequate investigation,” he said, “we won’t be sure whether or not he was the person that should have been approached in the first place—whether the approach was  something that was even justified.

Having police accountability issues hit so close to home has been difficult for Bible and his family. The word Bible kept using was “devastating.” “It’s just a devastating moment, and it’s a devastating moment that is a repeated theme across this country,” he said. “And I want people to know that Marcus’s life had value. He’s a human being. He’s a father. He’s somebody that many people felt was special. There’s a lot going on in his world and I feel like at this stage in our development as a society, we can be better than just shooting people.
“I definitely have more of an understanding now than I did before: the hopeless situation that some of my clients feel when it comes to a loved having been shot and killed by the police. It puts you in a devastated, a devastating sort of position, where you don’t know whether it’s right or left, or who to talk to, who you call, where to move, what to say.
“The loss is compounded by the messaging of law enforcement prior to any authentic investigation. And I think that is definitely something that I learned dealing with Marcus’s death and the way that he died. You feel hopeless; you listen to what’s being said in the media based on reports coming directly from the police, that they’ve conducted without any actual full investigation or communication. They go into messaging mode far before any sort of authentic investigation has actually occurred. And their power is tremendous when they go into messaging mode, because they control what information comes in and out.
“And I think this is why so many families are in a place where they often don’t do or say anything when it comes to these circumstances. Because they’re hurt, because they’re so devastated that they don’t know where to move. It took me probably about five or six days of literally being in my house, listening to my loved ones, and then finally thinking: This is what I need to try to do to bring to light what I think about this case. I’m somebody that trains and speaks all over the nation about police accountability changes, policies, plans, and it still shook me to be in that place and really hurt my heart to see firsthand how it was impacting people. To know that his grandfather, who’s 95 years old, who leans by his bed and prays every night, the night that he found out was praying once again, and then just started to cry uncontrollably. To know the human costs when we commit such acts can be paralyzing and they can also hide some of the truth about how we can be better in terms of policing because people are paralyzed into not moving.
“So I think that it was, and still is, remarkably devastating to folks, you know.”