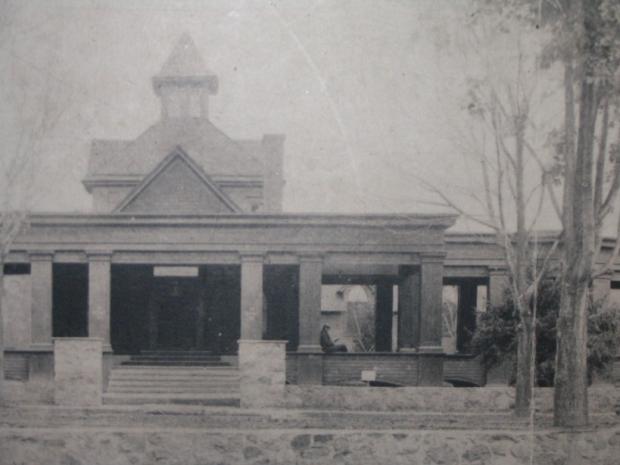 Where do you draw the line between the holy and the haunted? All religions are in the supernatural business. When it’s the in-crowd’s supernaturalism we call it sacred or spiritual. When it’s that of the marginalized, we call it magic or witchcraft. It’s no wonder that our holiest times of year are active for miracles of all types. This is the fifth in our series of holiday miracle-stories at Roycroft.

The founder of East Aurora’s Roycroft Community, Elbert Hubbard (1856-1915), was not thought to be a religious man. He was surely a spiritual one. He sensed humanity’s deep need of ceremony. He liked bringing people together, especially around the Christmas season.

“The Convention of the Elect,” among other titles, was what Hubbard used to call his series of parties, dinners, talks and conferences based around the solstice. The period was legendary during Roycroft’s 20-year heyday and as long after as Hubbard’s sons and fellow Roycrofters felt like keeping the custom. As if some psychic wake could be left of it, the campus even today comes alight for miracle-stories during the holidays. I walked into one myself at the Roycroft Inn.

It was around midnight on a Christmas Eve in the late 1980s. I had been visiting friends in another part of the inn and passed through the bar, the much-reconfigured area they call today “Craftsman Lounge,” on the way out. I spotted two bearded gents at a table by the fire. One of them hailed me, and I stopped.

One was artsy. He was and still is an author, collector, and art historian specializing in the Arts & Crafts Movement that had inspired Roycroft. The other was scruffy. The informal handyman of the inn, he was an inventor with many patents whose endeavors had made him financially independent. Everyone wondered why he worked at all. I had never known that these two were friends, and it was odd to see them sharing a table. Maybe it was something in the spirit of Christmas. I knew them well enough to know that both were lovers of speculation. This talk would have ranged far and wide.

I found the pair retelling ghostly and other wonder-stories from their days at the Inn. The inventor summarized the observations I had missed:

Neither man specialized in these subjects, but the pair were well positioned to match notes. From his long familiarity with the Arts & Crafts tradition, the historian surely knew of the movement’s general saturation with occultism. From all his years working in the Inn’s open and private spaces, the inventor was in an ideal position to know its structural oddities. And anyone who spent a bit of time at Roycroft could have overheard a few ghost stories. This random conversation, though, was my first hint that this relatively young Western New York building could have connections to ancient monuments on other continents; that Elbert Hubbard—stereotyped as more showman than scholar—could have had other interests; and that local supernatural legends might just have a connection to them both. It was the beginning of quite a ride.

The inventor had his own tale, and from the same time of year, a day or two before Christmas sometime in the 1970s. It could well have been on the winter solstice. It was in the wee hours after even the inn’s legendary basement disco Ali Baba’s had closed. On one of his custodial missions the inventor crossed the inn through the basement from north to south. Under what he presumed to be the main banquet room the inventor met an invisible barrier, a space in the passage through which he dared not pass. The air seemed charged like the forbidding energy of a walk-in microwave. It held a warning that filled him with dread. He backtracked and took another course to his destination.

The inventor was mystified. He had made that exact course at least once a week and sometimes dozens of times a day in the preceding decade. He had never encountered the like before and never did again. That’s the only story like that I’ve heard about the basement.

This “invisible wall” was reported by a handful of 1970s-1980s residents at another spot at the inn, one of the halls in the hotel wing. It never lasted more than a few minutes, and it never hurt anyone; past inclining them to change course. The phenomenon itself seems related to the classic cold spot, a temporary loss of temperature in a small space, which is so often reported at haunted buildings.

The inventor let on that he had a lot more to say about the inn, but I could never nail him down for an interview, which seemed odd. A desperate eccentric and a towering drunk, the inventor was typically dying for people to listen to him. Takers were uncommon. He always maintained that he would rather write up his recollections, which also seemed odd. Writing is like pulling teeth for most people.

The inn was shuttered in 1987 and stayed so for eight years. The inventor and the historian went their ways. By the mid-1990s I was doing research for my first book Shadows of the Western Door (1997), which held a chapter on Roycroft. Determined to track down anyone who might have information, I located the inventor by phone. He was ill, though his voice was hale. He promised to get his memoirs together if I’d just give him a little time. I figured the odds were slimming when I heard that he had entered the hospital. Then I heard that he had died. Case closed, I thought.

Two years later a hand-addressed package made its way to me through many forwardings, with nary a clue who sent it. The inventor and his promise were far from my thoughts, but when I started reading the thirty or so typewritten, hand-annotated pages I saw that he had made good. The miracle was that they had ever arrived.

None of the addresses on the envelope were correct. I figure that someone who stumbled across it and knew where I lived had just dumped it in the box by my-then apartment door. None of the writing on the envelope matched the occasional scrawls within. I can only presume that the inventor had finished this ragtag term paper on his deathbed, handed it off, and implored someone to get them to me with a last gasp.

The inventor’s memoirs held few of the village legends or eyewitness reports I had been hoping for. Instead, they were unique reflections about sites and perception. In essence, the inventor felt energy—a sense of presence—in some buildings. He knew when he was in a haunted house, even if those who lived there were unaware.

It started in his boyhood. He had moved to East Aurora with his family from a Wisconsin community at which he had never received the sense. He remembered the shock of entering the village homes of his childhood friends and feeling some that had a life behind life. (My Spiritualist friends at Lily Dale call this, “company,” and they do not dread its occasional manifestations.) The inventor found out quickly that no one else saw things as he did and that he had better keep his counsel to himself. This may be why he had saved it all for his memoirs.

The inventor had toiled so long as the inn’s handyman, he said, because it gave him a great sense of peace and companionship just to be within its space. He had never seen an American building so alive. He had been to famous monuments, cathedrals, and temples in other parts of the world, and only some of them compared. Only the inn’s closure could have sent him from it, and he had hungered for it ever since. He didn’t live to see it reopened.

The inventor never wrote about speaking to spirits or detecting any purpose to the “aliveness” he sensed about sites. For him it was all energy, and a haunting—as in Archibald MacLeish’s memorable phrase about a poem: “should not mean/But be.” For him, the Inn stood as an inverse of Marianne Moore’s fine line about poetry: “imaginary gardens with real toads in them.” The inn’s a real garden. Visit the campus and judge for yourself if anything hops or croaks.