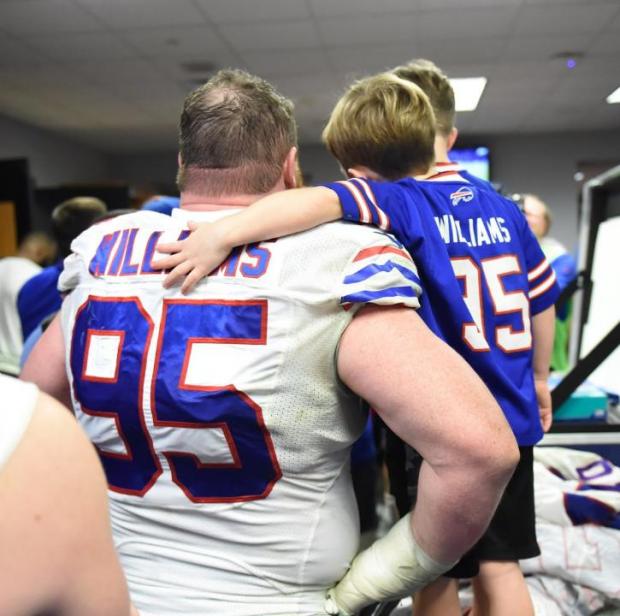 Kyle Williams of the Buffalo Bills watches as the Cincinnati Bengals help his team into the NFL playoffs. Photo courtesy of buffalobills.com.
by
David Staba
/ Jan. 3, 2018 7am EST

Fourth down. Twelve yards needed to sustain the possibility of the Bufffalo Bills reaching the playoffs for the first time since the last season of the 20th century.

The Bills have done their part, holding on for a 22-16 victory in South Florida against a Dolphins team that showed little interest in completing the regular season, or even bothering to follow the basic rules of football.

With Tennessee and the Los Angeles Chargers, the other two contenders for the last two AFC playoff berths, both leading their games late, the Bills need Cincinnati to wipe out a three-point deficit on the road against Baltimore, the other hopeful, with less than a minute left.

So it all depends on Andy Dalton, the most average quarterback in modern football history, to produce a miracle for the Bengals, who can’t be bothered to even make the playoffs and get gutted in the first round anymore, in order for the Bills to qualify.

This does not instill confidence. As Eric, an expatriate living in New York City and longtime friend of We Want Marangi noted on Facebook about that time, “God help us, the Bills’ playoff hopes are in the hands of the Cincinnati MF Bengals.”

Steve Christie’s 41-yard field goal with 16 seconds left gives Buffalo a 16-15 lead over Tennessee with just 16 seconds left in a wild-card playoff game at Nashville’s Adelphia Coliseum. Seems like kind of a weird name, since in January 2000, the growing cable company is in the process of revitalizing downtown Buffalo with plans to build its corporate headquarters there.

Rob Johnson, the surprise starter for the playoff game after Doug Flutie quarterbacked the Bills to the wild-card berth, stands on the sideline after guiding the Bills 38 yards in less than a minute to Christie’s field goal, despite wearing only one cleat for part of the no-huddle drive.

“That should put an end to the debate,” I think. “Nobody’s going to forget the One-Shoe Game. Johnson is a Buffalo legend now.”

I stand up from my seat in the press box, put my micro-cassette in one inside pocket of my blazer, a reporter’s  notebook in the other, and get ready to head for the winning locker room, where I will collect quotes to plug into the game story, column, and sidebar I have largely written during the second half, based on the presumption the Bills would pull it out. Johnson and Christie have just saved me the pain of starting over. Since I have the worst toothache of my life and the Motrin has stopped working, the fact the Titans are gracious enough to serve beer in the press box has been key, with a Budweiser keeping the soul-tearing pain at bay through the fourth quarter.

I turn to Buffalo News sportswriter Allen Wilson, one of my travelling companions throughout the season.

“Well, see you in Indianapolis,” I say in the world-weary, cynical tone legally required of banter between journalists referring to the site of Buffalo’s Divisional Round game. After nine road trips through the fall and early winter following the Bills around the country, I am not really looking forward to a 10th. Especially having gotten married in July.

“At least we don’t have kids,” I figure.

My 14-year-old son, Jackson, and his brother Oscar, 11, are sitting on the couch a few feet away from my recliner. Both are actually looking up from their phones when Dalton takes the snap in the shotgun formation.

With the Baltimore pass rush circling from the outside, Dalton steps up to his own 45 and launches.

Bengals wide receiver Tyler Boyd grabs the throw in stride just outside the hashmark at Baltimore’s 23. Jackson, a Patriots fan first and foremost, jumps off the couch. Oscar, who is so barely aware of the significance of this or the Bills game that just ended that he has asked twice to switch over to Adam Ruins Everything twice in the last 10 minutes, quickly follows.

As Boyd outruns three Ravens defenders, one of them yells, “Holy shit!”

Given the moment’s significance, I let it slide.

Looking back to the field, Christie has just booted a high pop-up to the Tennessee 25 in order to avoid a long return that would put the Titans in field-goal range. I notice Buffalo’s entire coverage team angling to the middle of the field.

“Must be everyone wants to jump on the pile that will be one of the jubilation pictures in the paper tomorrow,” I think.

This is contrary to a basic philosophy of football, and life—stay in your lane. But with the kick landing in the hands of massive, and very slow-running, Titans fullback Lorenzo Neal, it seems like a harmless blunder.

Until Neal hands it to tight end Frank Wycheck. Wycheck is not a breakaway threat, either, but he threw a 61-yard touchdown pass on a trick play during the regular season. And on the near sideline, wide receiver Kevin Dyson stands all by himself. With several Titans lined up in front of him, ready to block.

The press box is situated ahead of the play, so it looks to everyone, including the home press contingent, like an illegal forward pass. Even as the crowd begins roaring, dismissive “It’s coming back” declarations bounce around the rows of reporters.

Until Dyson hits the Buffalo 20 and someone loudly notes, “There was no whistle.”

“This will be the first time in my life the Bills have been in the playoffs,” Jackson says.

I resist the urge to “No shit, Sherlock” my younger son. I do, however, point out that there are 44 seconds left and the Buffalo Bills are involved. I do not mention the play in Nashville nearly 18 years earlier.

The clock expires without incident. The Buffalo Bills are in the playoffs.

After covering the team with varying degrees of regularity for 25 years, I had slacked off tremendously the past couple seasons. Largely because I had gotten tired of writing the same columns over and over with different names and run out of synonymous phrases for “playoff drought.”

On Sunday, the Bills and Bengals gave us a new story. No matter how things end up in Jacksonville, where former Buffalo coach Doug Marrone’s surprising AFC South titlist Jaguars await, this week, it’s fun to be a fan, and a writer, again.