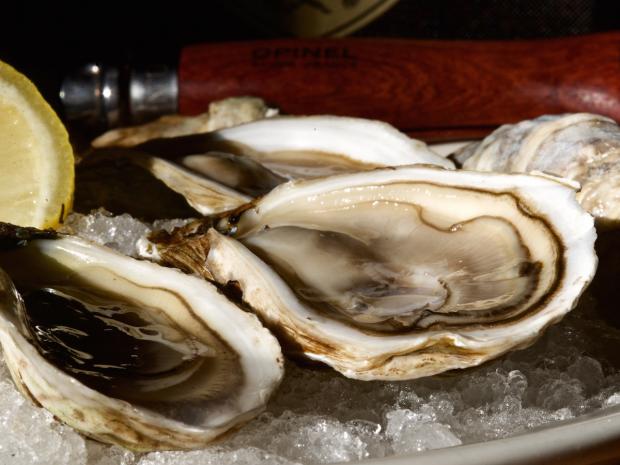 I’m going to try to convince you to get into shucking and serving oysters at home, a festive ritual that turns an ordinary soirée into a memorable one. Not only a delicacy, oysters also turn out to be fascinating studies in history, geography, biology, environmentalism, and even ethics, as we’ll see. But it is the casual elegance and oceanic buzz of sharing them with family and friends that makes any of those other aspects worth investigating.

Oysters were once the world’s most widely consumed protein source, especially in port cities. Like bluejeans, oysters have since scaled the social ladder, now mingling comfortably with champaign, caviar, and coattails, but they’ve not lost their connection to the scrappy raw bars of 1800s San Francisco or the briny crates of a depression-era Boston market, both of which hold an old-world appeal that’s currently on trend. You can bill oysters as upscale, downmarket, or anywhere in-between.

The oyster’s social mobility is only rivaled by its versatility in pairing up with almost any drink or food. I’ve served oysters with grilled hotdogs and beer, and I’ve served them with excellent champaign before multi-course extravaganzas. It all works.

There’s hardly a more playfully elegant way to kick off a dinner party than to shuck for your guests, but, because shucking is a bit of a job, you may need to limit the number of folks you invite, or enlist a co-shucker. I’ve solo-shucked for ten people, and while I pulled of this 60-oyster task, I started to feel more like a bar back than a host. But when you’ve got the right group—four, and six are ideal—shucking adds a festive dimension to hanging out, opening conversation in new directions and helping to pace the hang.

My recommendation is to shuck where your guests can face you: a kitchen island or counter top with bar, even a free standing table. Not all guests will grok what’s up, so I often announce, “It’s oyster time,” and beckon our guests to join me. Once they do, conversation swings to oysters and flows from there. Sharing tasting notes is especially fun, if only because oysters inspire such odd descriptions: “It’s like mushroom soup in the ocean,” or, “Oh, that’s mossy,” which I recently offered up, as if Id actually eaten moss (I haven’t).

Indeed the flavor and texture of raw oysters—and sometimes the very concept of munching down a still-living bit of sea life—can mean that some guests won’t dive in. However, I’ve now served raw oysters to five people who had never had them before—all of whom were 40+ years of age. Perhaps folks are willing to give it a shot out of polite regard for the procuring and shucking efforts, but in four out of those five cases the newbie has totally enjoyed the oysters, evidenced by their eating a half dozen or more.

What people don’t necessarily know about the flavor and texture of oysters is how incredibly varied they are. There are over 150 varieties of oysters in N. America, the most prolific environment for oysters in the world. Those varieties come from just five species, and it is their underwater habitat (called merroir, analogous to wine’s terroir), plus certain farming techniques, that give rise to such diversity. Gimmick? No, indeed not. Like the multitude of wines produced from just one grape, oysters, too, are craftily cultivated, such that one could legitimately call an oyster farmer an oystermaker. Some farms grow the same species less than 100 yards from each other and still produce wildly different oysters by varying depths, harvesting techniques, exposure to sunlight, bottom conditions, etc. Seasons, too, impact flavor and texture in significant ways as the oceans go through their annual phases.

Indeed, the taxonomy of oysters is complex. Different species have travelled the world, such that the typical East and West Coast taxonomy you’ll often hear is largely an inaccurate distinction. It’s not impossible to become versed in the oyster taxonomy, but I approach it with the same humility I reserve for learning about wine and avoid generalizations all together.

We happen to have some of the world’s best oysters on the East Coast, and the vast variety makes the Western Atlantic a veritable boutique of bi-valves. Large-scale oyster farming is more of a West Coast phenomenon, while the East Coast is littered with small oyster farms, typically run by just a handful of ruddy-cheek folks wearing waders, wielding stubby oyster knives and various sifting trays, driving pick-up trucks and beat-up boats. These are decidedly small-scale operations, and there are well over 1000 shellfish farmers between Florida and Maine.

So how do we land-locked citizens tap into this amazing diversity of oysters?

That’s is where Real Oyster Cult comes in. Based in Duxbury Bay, Massachusetts—a nexus of renown oyster farms—Rob Knecht and Sims McCormick started Real Oyster Cult as an online mail-order service which curates oysters from over 70 different farms. To order, simply go to their website or use their app, choose from the current offerings, and receive your oysters overnight on either Friday or Tuesday.

Why mail order rather than buy oysters in your grocery store? Because they’re better, always. At the grocery store, the harvest date is unknown, and you’re simply playing freshness roulette. I’ve had decent oysters from the grocer, but more often than not I find myself picking through a few funky ones, feeling less than impressed, and wishing I’d mail ordered them.

I also don’t know anything about the source of grocery store oysters, but when I buy from Real Oyster Cult I know exactly what I’m getting and from whom—right down to the farmers’ names and faces. Typically the oysters have only been out of the water for a day when they arrive at our house, and they’re always clean, tight, ultra-fresh oysters. There’s also evidence of superior farming techniques, such as deeply cupped shells, a result of tumbling, which periodically chips the forward edge of the shell, promoting deeper shells and, thus, more meat. You just can’t get such unquestionable freshness and careful curation at the grocery store.

There’s a significant sustainability factor to eating oysters, too. The Real Oyster Cult website sums it up well:

“Our Earth is getting crowded. In fact, we could reach nine billion people by 2050 and that’s a lot of people for our planet to feed. Not to mention, climate change, acidification and overfishing are taxing our ocean’s natural stability. The good news: oyster farming is completely sustainable (also highly regulated to assure you’re eating oysters from clean bodies of water). No antibiotics, no depleting the sea stock to feed these creatures. And to top it all off, oysters support our ocean’s ecosystems. It goes something like this: eat oysters, support oyster farms, save the oceans.”

There’s science to back all of that up, having to do with how oysters reduce nitrogen levels, and how that impacts ocean health, etc…but I’ll leave the technical explanations for you to google if you’re curious.

In my opinion, oysters occupy a status somewhere between animal and plant—though, admittedly, a venus fly trap is the best likely comparison. Yes, oysters are resistant to being pried opened, but, then again, so are coconuts. Oysters don’t have a brain, and, like plants, they are stationary filters of nutrients. To drive the point home: today nearly all cultivated oysters are “planted” from tiny seeds cultivated on land-bound tanks. The more I’ve considered the oyster, the more I’ve come to think of them as quasi-plants that are uniquely full of protein and Omega-3 fats. I’ve never seen a vegan come around to that thinking, but oysters certainly occupy a biological gray area where sentience is questionable. Especially given the dietary challenges that face today’s growing number of pescatarians, vegetarians, and vegans, it seems an oversight to ignore oysters when “eating ethically.”

Philosophy aside, shucking is probably the greatest deterrent to diving into oysters at home, but shucking is not only do-able, it’s a blast. I was lucky that my ocean-dwelling brother taught me, but just watch some online videos (including those provided by Real Oyster Cult) and you’ll know enough to get going. As for oyster knives, I’ve come to love the Opinel No.9 Oyster Pocket Knife, but the Real Oyster Cult-branded knife that came with our first order is excellent, too.

Shucking makes you into a bit of a hosting rock star. The spectacle and sociability of shucking “live” for your guests, as well as the ultra-freshness of the oysters, can turn a standard-issue gathering into a memorable one. And when you mention that the oysters were just plucked from the ocean and rushed to your door, your guests will be doubly delighted.

We just had a dinner party for six, and I shucked two types from Real Oyster Cult: Raspberry Points from Prince Edward Island and Standish Shore, their signature oyster from Duxbury Bay. This pairing was a study in the difference between brine and salt—two components of the ocean’s flavor that infuse oysters in varying ratios. The Raspberry Points were pure brine, with deep cups and just enough resistance to chew and release all the other flavor notes, like mushroom and melon. The Duxbury’s were salty with a smooth with an ultra-clean mushroom finish—utterly devoid of funk while full of pure ocean goodness. Both leave an extended after taste, which is scrumptious when washed with champagne.

Yes, this time of year is ideal for champagne and oysters, which is my favorite combination. Got a gathering you’d like to make more special? Consider ordering from Real Oyster Cult, treating your guests, and maybe even starting a new tradition.

Happy Winter, everyone. May 2018 be filled with newly discovered luxuries and bountiful buzzes.