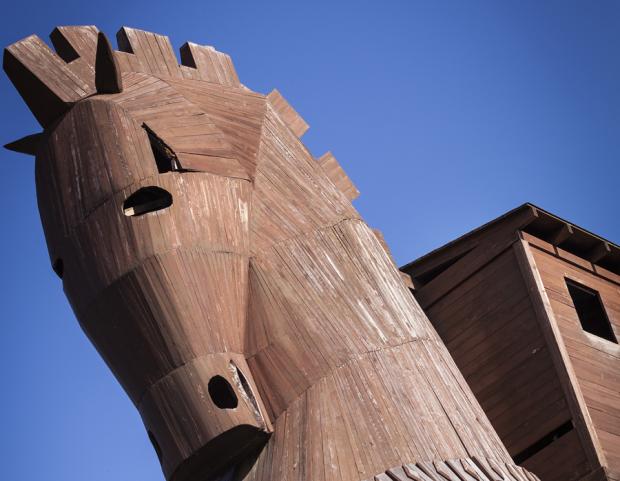 I had another occasion today to see parts of the movie Troy.
The meditative third partial viewing. It was annoying.
The older and thick leadership of the Greeks
coming at Troy out of pride, lust, quest for dominance
and subservience, out of resentment and envy, and greed,
(Troy being home to the Trojans of course,
with their wicked gamesmanship,
their deadly counter attack game).
Politics as blood battle, and rarely about ideas.

The frustration with history, just the endless put upon-ness
whether in Texas or New Jersey, the Midwest, Rigaud Quebec,
Burnaby, possibly not at as much, Kingston. Certainly Toronto: put upon.

The “Pig of a King” as Achilles describes him, but the King and his brother,
and the other leadership, like men you’d find in any city today,
owning or controlling everything, in balance among only them.
Swift means of knocking down upstarts. Find them in the poetry world
as well, or most of the arts. Present in another form in hockey,
almost a realized form of equal competition, so viewable more purely.
Deviousness will only get them so far in hockey; harder to have an
injustice-based winning streak.

That much the good inspiration. The negative inspiration
being hot flushes of impatience with such battling still going on.
That’s what I thought of while watching Troy, with Brad Pitt.
Not the enormous cinematic stars in a glorious battle
but cities under siege, of which there are many hundreds

ISIL, the Taliban and Boko Haram simply laying siege to minorities,
rampaging for the joy of it, and claiming to represent a religion.
It reminds at least on scale of evil to the Inquisitions
making of merciful Christianity a cause for annihilating people
for the purpose of terrorizing and controlling all the people.
Divide and conquer by stigmatizing some and making the others
desperately want to show they’re not them. It was still being used
in high school. It wears thin, and is always a part of the
conservative movement. Well nigh defeated by it a lot of people.
It was ingrained in many. Absurd presumptions as a way of thinking.
A cruel form of dog training, for everybody.

It’s such an old business, from which the arms business, Big Traders,
and the great facilitators like Koch Bros and Clark Industries
manipulate the world, the oldest business, more evil and destructive
than the oldest trade, not even a close comparison,
as the oldest trade is only “evil” in so much as it functions
on the invasive business of working the subjugated,
otherwise theoretically just an equal person to person exchange
of resources. Given self-control of the process,
I could see it being less offensive than serving tables on given days
and not as uncomfortable as working in skyscrapers,
while at the interactive level, it doesn’t even have to involve
condescension of inverse power relationship, whereas banking jobs do.

In wretched or class soaked environments, or any other job
with a bullying unfair component, it’d be a task,
and you’d have to have the right to say no,
as one does in any job. That’s the key difference.

The right to say no is what is taken away in bad power relationships.

The right to say no is sacrosanct.

No one’s a good human being if they cannot accept that.
“No” is the lightning rod of good relations among people.
And there really is very much to say no to.

John Barlow is a poet living in Toronto.