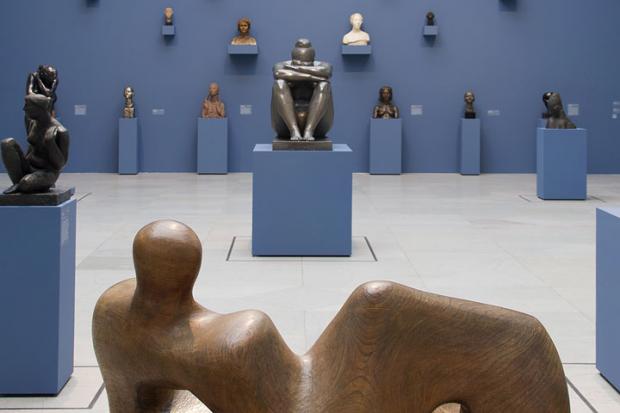 The subtitle of the major Picasso exhibit at the Albright-Knox is “The Artist and his Models.” Models in the sense of the substantial list of lovers and wives and artists and friends he portrayed in his paintings. But models also in the sense of historical and contemporary artists his art was in dialogue with. As well as—to complete the picture—artists who modeled their art on his. The profusion of modern art styles and schools that sprung from Picasso and associate George Braque’s seminal invention of Cubism.

The works on show are mostly from Albright-Knox holdings, but with some significant borrows. Such as the colorful comical Three Musicians, from the Philadelphia Museum of Art. Or The Women of Algiers (after Delacroix), his playful serious excursus on the earlier artist’s 1834 masterpiece of similar subject matter, disparate style, from the Wadsworth Atheneum, Hartford, Connecticut. The Picasso version is from 1954.

Nearby is Picasso rival and friend Henri Matisse’s Standing Odalisque with Tray of Fruit of 1924. Similarly to the Picasso work indebted to Delacroix—if not to the same Delacroix painting, to Delacroix’s orientalist impulse in general—as well as another possible influence on the Picasso work. As well as itself possibly influenced by Picasso’s La Toilette standing nude of 1906.

Whereas Picasso’s L’atelier de Cannes of 1955 is in unmistakable reference and homage to Matisse, who died the previous year. To any number of Matisse’s orientalist flavor room interiors—so with a glance back to Delacroix—usually with a window and view of palm trees and Mediterranean waters. The atelier with a Moorish influence tri-lobe arch, and window looking out on palms and possibly sea waters.

As also Picasso’s Bacchanale of 1959, with its distinctly Matissean pastorale figures and poses—languid recumbent flute-players and leisurely lovers—and even clouds in the sky reminiscent of Matisse’s latter-career paper cut-outs.

Also Cezanne among the precursor artists. Picasso called him “the one and only master” for the invention of Cubism. As palpably in the breakup of visual surface in his misty translucent Le matin en Provençe of about 1900-06.

Subject matter models include wives and lovers and friends in various stylistic transmogrifications. And prominently Picasso himself, in portraits of the artist as a young man and old. Together with poet Apollinaire and painter and poet Max Jacob—Apollinaire dressed as Pierrot, Jacob as a Franciscan friar, and Picasso as Harlequin, a figure that occurs frequently in Picasso’s works—in the synthetic cubist mode in the Three Musicians, from 1921. And with Apollinaire again in a massy classicist mode in Reading the Letter, from the same year.

A significantly older Picasso in the Artist and his Model from 1965, in a rough-hewn latter-career signature figural mode. Contending—in the severely contortionate figure of the model—with romantic classicist master Jean-Auguste-Dominique Ingres—and perhaps also Delacroix—as well as ultimate aesthetic issues of two dimensions versus three, painting versus sculpture. And in the figure of the artist, the issue of mortality. Anticipating the death’s-head facsimile self-portraits he would produce nearer the end. While across the room, several still lifes with actual death-heads. Why not as future self-portraits? Anticipatory self-portraits.

One room is about the 1913 Armory Show in New York where Americans were formally introduced to Picasso and Braque and the artistic epiphenomenon of Cubism, amid works of other European avant garde artists the likes of Duchamp, Gauguin, Matisse, and Van Gogh. Two years earlier, photographer Alfred Stieglitz had shown a few Picasso works at his 291 gallery in New York.

Whereas, not much in the way of political art. Two works from the early 1960s on the theme of the Rape of the Sabines—described in wall copy as relating to the Cuban missile crisis—in the style and with many of the same motifs—the horse, the woman, the baby, the anguish—as his great Spanish Civil War anti-Fascist inhumanity statement Guernica. Even as we embark on our own Fascist era.

Nor much on the classicism—harking back to the sixteenth century, harking back to the Greeks—that was the constant living waters source for his art, and over the years keeps reasserting its primacy amid the plethora of more idiosyncratic styles and inventions.

But to enter the Picasso exhibit, you walk through the gallery main sculpture court that at the moment features a spectacular array of classicist and permutations statues and busts from throughout Picasso’s time period. Works such as he would have known and been inspired by, from artists the likes of Auguste Rodin and Aristide Malliol and Gaston Lachaise. Along with a few Modernist abstractionist works, by the likes of Henry Moore and Jean Arp.

The Picasso exhibit continues through February 19.